A Possible Alternative to Steam Direct

With the steam direct changes going into effect next week, I wanted to talk about another way of providing quality control on Steam
Josh Bycer
Blogger
June 07, 2017

The recent announcement regarding the Steam Direct Fee has been met by mixed opinions of the negative variety.  Steam Direct's purpose was to be a barrier to prevent scammers and low quality games from being on there. However, the $100 fee doesn't even feel like a slap on the wrist, and leads me to thinking about other solutions.

As we've talked about before, one of the best and worst parts of the Game Industry is the fact that there are no standards for games. If someone wants to make a 10 minute art game or a 100 hour RPG, both are acceptable. The problem is that without standards, there cannot be any real quality control.

We've used the example of retail stores before to talk about how things are different. When you go to a store like Acme or Wegmans, you expect a certain level of quality of the products there. If a product isn't selling or is not up to the standards, then it will be pulled. When it comes to retail goods, it's very easy to figure out set standards of quality:

Stores have to maintain their brand, or people will shop elsewhere. This is why standards of quality are such a big deal and are upheld. Obviously the next question is: What can we do about video games?

The beauty of the digital era for games has been allowing anyone to put out a video game without the need of a retail store. Many of my favorite games this last decade have been from the Indie space. However, this has created an unregulated market for any and every game to be posted. Since Steam blew up, Valve has had nothing but problems with quality control.

Originally they would vet every game on the platform, but this proved too daunting. The whole point of greenlight was to let the fans decide what games they wanted on Steam. Unfortunately, this proved to be corrupted and essentially opened up Pandora's Box of shovelware. 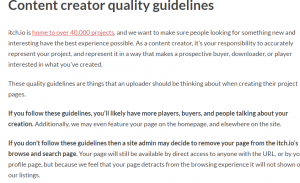 Quality guidelines should become a given for any digital store

With the plans for Steam Direct, it doesn't look like it's going to solve the problem of quality control. This has opened up the door for other digital markets to try and differentiate themselves from Steam.

Itch.io started in 2015 as an Indie alternative to Steam, and has been growing in popularity since. The store allows people to upload content that is DRM-Free or through Steam keys. Instead of a fixed cut for selling games, Itch.io allows the seller to determine how much per copy sold goes to the platform.

Another major difference is that there is quality control related to the products available. If your game fails to meet their guidelines, it will be removed from search results. Being designed from the ground up for Indie games has helped to grow Itch.io, and there are more and more indie developers talking about it as an alternative to Steam.

As we've talked about, the problem with the concept of a Steam Direct Fee is that either it's so low that it's not effective, or too high that it stops reputable games from smaller developers. Valve still shows no signs of providing direct control over what goes on Steam, but maybe quality control is the answer.

On the console side, Sony, Microsoft and Nintendo all have strict rules that must be followed to allow a game on the platform. Console certification is a big deal and can be challenging if you're not prepared for it. For more on the topic, Rami Ismail talked about it on his blog last year.

Instead of a fee, here are my ideas for a set of rules for Steam. If your game has two of the following for more than a month, then it will be removed from the store:

As a special addendum, if it is proven that your game has stolen assets from another title, influenced review scores, or any other illegal acts, that should be immediate grounds for removal. If someone continues to violate the guidelines, then they would be subject for being removed off of Steam. For early access titles, a special condition would be if a game has not received any updated builds in over 6 months and would be considered abandoned.

Steam Needs to Step Up:

Steam is no longer the only digital store in town. In my opinion Valve needs to take more steps to punish people for abusing the system and protect the consumers. The recent announcement regarding Steam Direct doesn't sound like it's going to fix the discoverability issue. The challenge is figuring out something that is fair to developers, while still providing quality control for Steam and the consumers buying games.

To end this post, I want to know what you think about having quality standards for video games, and are there any points that you think should go on my list or replace my conditions?