A guide to easy and pretty gaming gifs

An overview with tips and tools on how to make animated gifs for your game.
Thomas Reisenegger
Blogger
February 02, 2017

In preparation for my upcoming GDC talk “Get Journalists to Cover Your Game: Lessons from Online Dating, Praying and ‘No Man’s Sky‘“ I talked to plenty of high profile journalists to find out what makes them cover games.

One thing that kept coming up was that animated gifs – in pitch emails or spotted on twitter – often easily convince editors to check out a game.

Also from professional experience of doing games PR for years I can’t think of a better tool to show off your game. Our current approach at ICO Partners when pitching games in emails to media and influencers is to have a snappy headline, two short sentences that explain why they should care about a certain game followed by a nice animated gif and links to the press page and a blog post / full press release. That’s about it. Sounds easy but actually boiling the essence of your game down in two sentences and a 5 second gif is quite a lot of work (but it’s work that pays off).

For this reason, I decided to put together a guide for creating easy and pretty gaming gifs, that should give you all the tools you need to let your game shine in a nice animated image.

I separated this article into 3 steps

1) Decide what you want to show in the gif

1) Decide what you want to show in the gif

First, think about what the highlight of your game is, or what you want to show. Maybe it’s a special gameplay feature, maybe you want to explain the concept of your game, maybe the atmosphere, or maybe you just want to show off some nice animations. Depending on that the size, resolution and length will vary greatly, and because gifs are so small in file size you really have to focus your attention on your most outstanding feature.

I usually try to think of gifs like little film trailers – you probably won’t have the time to explain all the details your game but your aim is to bring the mood and main selling point across in a way that should make people care and want to find out more.

2) Get video material for the gif

Depending on what you want to show in your gif there are different paths you can take on the recording front. I always decide first I want to a) show short looping gameplay snipped in the gif or b) have a gif that is sort of a mini trailer for the game (perfect for the game announcement or launch).

At this point don’t worry too much about file sizes or resolutions, we will compress the gif in the next step. Do however keep your gif length in mind. I usually make them 3 to 10 seconds long for Twitter and email usage. Although this sounds pretty short you can actually fit some good material in there.

Option a) Record your gif footage in-game
As mentioned in the intro, working in a PR agency we usually don’t capture footage ourselves but get videos on trailers and transform them into gifs which proves to be a time-saving way with good results (more on that in Option C.). If you instead want to capture footage yourself that is a good option too. In this case I would recommend listening to people that know more about video capturing than me in one of the many online threads and tutorials about capturing footage and moving on to point 3 about gif compression. (Also if you have tips and tools on capturing please let me know Twitter).

Option b) Record a short gameplay snippet from a video
If I already have a video that I wish to record some gameplay footage from for a gif, I use free software called gifcam (download link). It opens a little frame on your PC screen and captures whatever appears within that frame.

Once the software is open, simply have your game or a video of your game (often easier) running and capture the bit you want.

Usually my window capturing size is about as big as as a credit card (don’t make it much bigger, you will need to compress the gif anyway) and be sure you record with the maximum frame rate that GifCam allows. In terms of frames per second it’s always better to get a nice raw file and compress it later.

Usually it takes a few tries to get exactly the bit you wanted but the software also offers a simple editing engine to remove the things you recorded by accident, or if you want to get a gif that loops in a perfect cycle.

That’s it! Skip the next part and go to the section about gif compression

Option c) Transform a trailer into a gif trailer
This is my favourite way to makes gifs, as it’s usually really quick to do and brings great results! All you need beforehand is a trailer or a video of your game. First some tips on how to cut your video into gif length and then some tips how to transform the short video into an actual animated gif.

Option C step one: Cut your video into a small video in gif length

Load your trailer or gameplay video into a video editing programme. The options here are limitless, from pro software like Adobe After Effects, to free software like Movie Maker or iMovie – anything that can cut video works. I usually use Videopad Pro. It’s very straightforward and costs around $30. Next you cut together the nice little video that will end up es your gif but for now save it any common video format (mov. Mp4 and so on).

Some general tips when cutting small video in gif length:

Cool, now that you have the raw video version of your gif footage, we want to transform it into a gif. 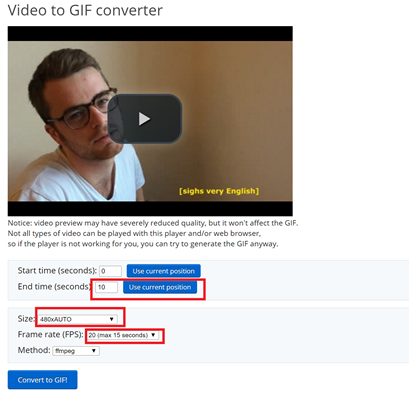 Once you have your gif, the final big step is to compress it to fit your needs. Again, there are probably many ways to do this but my favourite quick and easy go-to solution is also on the website ezgif.com.

First, think about where you want to use it before you go to compress your gif.

Use the gif optimizer on ezgif.com 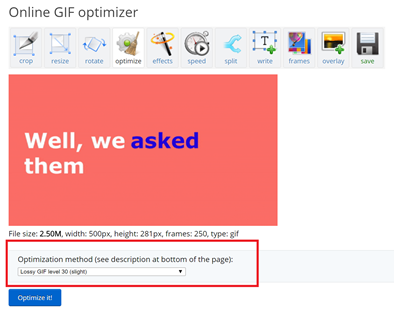 After all those steps and some playing around you should have a great looking gif!