Sales data from around the world shows not only the top-selling retail titles, but also the relative strength of each region.
Matt Matthews
Blogger
October 02, 2013

(This blog focuses on retail sales units, but also see my editorial that examines the fuzzy notion of a "sales unit.")

With all eyes focused on the impending launches of new consoles from Microsoft and Sony, and an increasing focus on digital sales data, retail sales charts full of last-gen titles have been far less interesting. However, before we get into the silly season of weekly blockbuster game launches and Black Friday extravaganzas, I wanted to take a moment to show you what the first half of this year looked like for retail software.

After going over each chart, I'll combine the various known figures together to give you what I think is a reasonably good estimate for a top 10 global retail titles for the first half of the year. Finally, I'll point out how the combination of these retail figures with what we know is happening digitally might shift the ordering on the list, and might even have displaced some titles.

To begin with, let's look at the European chart, which includes retail PC software sales, unlike the other two charts. 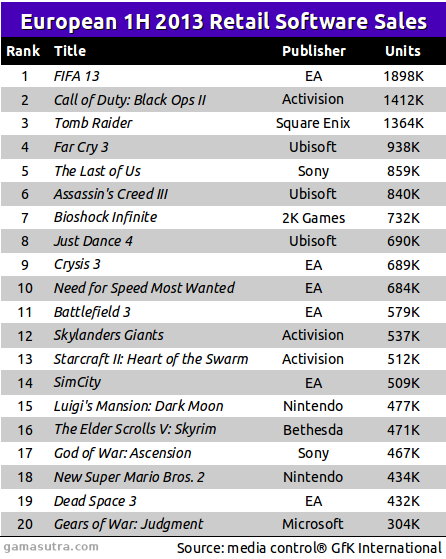 Out of these titles, the top publisher is Electronic Arts with nearly 4.8 million units across six titles. This includes the popular FIFA 13, which topped the list with nearly 1.9 million units sold at retail. Two other publishers come in at around half the units that EA represents on this chart, Activision and Ubisoft, both with around 2.5mm units sold at retail across three titles.

Several single-platform titles made the chart. On Sony's PlayStation 3, both The Last of Us and God of War: Ascension were top-sellers, while Gears of War: Judgment slipped in on the bottom of the list for the Xbox 360. Two Nintendo 3DS titles, Luigi's Mansion: Dark Moon and New Super Mario Bros. 2, placed in the bottom half of the chart. I suspect that Nintendo's Animal Crossing: New Leaf fell just outside of this top 20, since it launched at approximately the same time that The Last of Us did on the PS3, and it has seen strong sales in all territories, according to sales ranking charts published since June.

Finally, two home computer titles sold approximately 500,000 units each: Blizzard's StarCraft II: Heart of the Swarm and EA's SimCity. These titles are particularly interesting because one presumes that digital sales are a large fraction of these computer game sales, but they still sold well at retail, relatively speaking.

Whereas the European chart is dominated by Western-developed titles, the Japanese chart is likewise dominated by titles from Japanese developers and publishers. That chart is shown below. 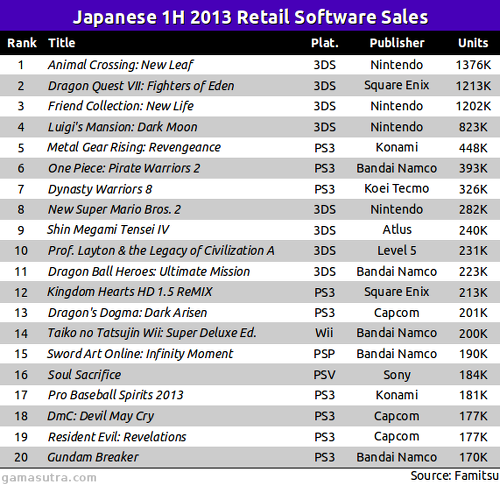 While Europe and the U.S. charts are dominated primarily by software for the twin HD consoles, Sony's PlayStation 3 and Microsoft's Xbox 360, Japanese consumers strongly favor Nintendo's 3DS and the PS3. Seven of the top 10 titles are for the Nintendo 3DS, and four of those were published by Nintendo itself. Out of the top 20, nine are PS3 titles.

A quick comparison of the European chart with this one shows that these two lists only have Nintendo 3DS titles from Nintendo in common.

That also holds for the U.S. chart I'll show below. Only those 3DS titles from Nintendo like Animal Crossing and New Super Mario Bros. 2 appear to have global appeal in the sense that they are top-sellers in these three key regions.

The U.S. sales chart for the first half of 2013, as shown below, was provided by the NPD Group. 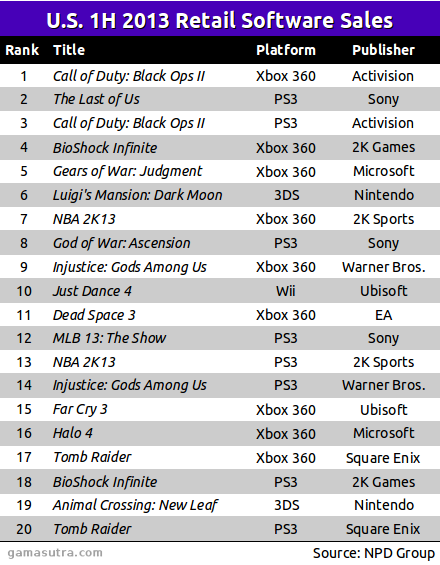 This data does not include PC software, and breaks out titles by platform. That means, for example, that SimCity and StarCraft II: Heart of the Swarm are not on this list, although their sales at retail could quite possibly have earned them a spot.

Regardless, it appears that Activision's Call of Duty: Black Ops II is the top-selling game across all platforms in the U.S. for the first half of 2013. The top game in Europe was FIFA 13, and in Japan it was Animal Crossing: New Leaf.

American gamers clearly have more in common with their European peers than with their Japanese peers, but even when compared to the Europeans there are some subtle differences. For example, Injustice: Gods Among Us from Warner Bros. Interactive Entertainment does not appear anywhere on the European chart whereas both versions for the Xbox 360 and PlayStation 3 appear on the U.S. chart. (Remember, the European chart combines versions of a game into a single entry.) A similar things happens with Far Cry 3, which ranked fourth across all platforms in Europe but the Xbox 360 version alone placed just 15th in the American chart.

Also, look at the rankings for the platform exclusives God of War: Ascension (for PS3) and Gears of War: Judgment (for Xbox 360). In Europe the Sony-exclusive game sold better than the Microsoft-exclusive, and in the U.S. the reverse was true.

Putting the Pieces Together

Finally, using the figures that have been published about U.S. sales in the first half of 2013 (for example, Nintendo has been very forthright about retail sales of 3DS games this year), I put together some rough estimates for the titles on the list for the U.S. and then combined them across versions. If those totals are put together with the totals from other regions, the following global top 10 list falls into place. (In all cases, I have conservatively estimated what I feel is a reasonable lower bound for unit sales.) 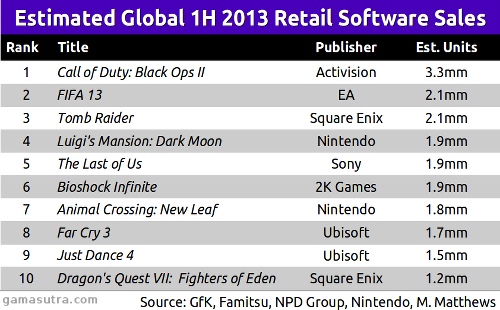 By a wide margin, Activision's Call of Duty: Black Ops II is the top-selling retail game for the first half of 2013. Coming in second is EA's FIFA 13, which has moved at least 2 million units so far this year. Square Enix's reboot of Tomb Raider is third on the list, while Nintendo's Luigi's Mansion: Dark Moon for the 3DS comes in fourth.

(I'll again remind you that we do not have PC sales outside of Europe, so it is entirely possible that retail sales of StarCraft II: Heart of the Swarm or SimCity would put those games onto this list. We just don't know.)

Notice the influence that each part of the world has on the list. The main contributor to the Call of Duty: Black Ops II sales is the United States, while Europe supplied most of the FIFA 13 and Tomb Raider sales. Japan contributed the most Luigi's Mansion: Dark Moon units.

Only one game made it onto this top 10 by launching in a single territory. Square Enix's Dragon Quest VII: Fighters of Eden has only been released in Japan, but with sales of 1.2 million, it made the final spot on this list.

If I had put an eleventh spot on this list, Ubisoft's Assassin's Creed III would have claimed it, since by my estimates its sales were just a hair below Dragon Quest VII. It's entirely possible that the two would swap places if I had more precise figures to work with.

As has become more clear with each passing month, sales at retail do not tell the full story. Let me give two important examples just to show how the retail chart above is still a big part of the market, but clearly not everything.

First, Luigi's Mansion: Dark Moon has sold significantly more units than what is shown here for retail sales. Nintendo reports that it has sold 2.65 million units through the end of June, where it is counting units sold at retail, through digital downloads, and bundled with hardware. While I don't think that makes up for the entire 700,000 unit gap between their reported figure and mine, I do think that it's possible that 100,000 to 200,000 units were sold digitally. That would have potentially pushed them up on that top 10 list, just through digital sales.

The same could be true for every title in the top 10. Every single one of these games is available for download right now for at least one platform, and in some cases multiple platforms.

And there are games that should probably be on this list that aren't. Just looking at Ryan Langley's XBLA reports every month, Minecraft for Xbox Live Arcade has sold 1.8 million new copies during the first half of 2013. That would have gained it a place on this chart, and if we add in retail sales (which are counted separately), it could possibly have pushed ahead of games like The Last of Us.

Until platform holders or publishers or developers are more transparent about their sales figures, we simply won't have the full picture. I continue to be impressed with Nintendo's progressiveness on this point. It's true that they don't break out the digital sales separately from the retail sales, but they at least report an aggregate number. That's arguably more helpful than just retail data from GfK, Famitsu, or the NPD Group.

And, as I like to point out, Nintendo also reports a total digital sales revenue figure for its business every quarter. Other than a couple of random data points over the past five years, neither Sony nor Microsoft have come close to that level of disclosure.

Regardless, the retail data above comes from 22 countries that collectively represent around 1 in 7 people on Earth. That statement says much about just what we're looking at. On the one hand, yes, retail sales are still significant. The global top 10 above accounts for approximately 21 million units of software and an estimated value of around $900 million - $1 billion.