The number of people playing online games in the UK rose during the pandemic, according to a report from UK communications regulator Ofcom.
Chris Kerr
News Editor
June 09, 2021

The number of people playing online games in the UK rose during the pandemic, according to a new report from UK communications regulator Ofcom.

The organization said that online gaming saw a big increase in 2020 due to the COVID-19 pandemic, with 62 percent of all adults and 92 percent of those aged between 16 and 24 explaining they played games on an electronic device as the country grappled with shifting restrictions, tiers, and lockdowns.

Additional research showed that the overall UK gaming population increased by 63 percent over the course of the spring 2020 lockdown, with over half of all of those players agreed that gaming helped them cope with lockdown.

The report added that consoles and computers were the most popular devices among young adults, but that smartphones were the most commonly used gaming device across all age groups, and were used for gaming by 39 percent of all UK adults.

It also highlighted data that indicated gaming was an equally popular pastime among men and women, but that the latter favored mobile gaming while the former spent more time on computers and consoles. 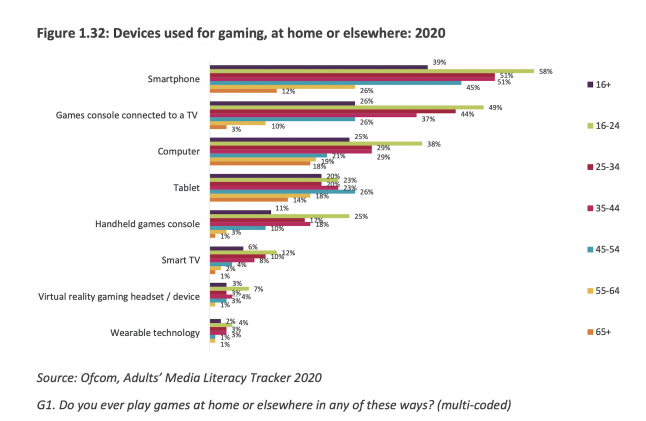 According to survey data from Ampere included in the report, half of all respondents aged between 16 and 65 agreed or strongly agreed with the statement "I only play free-to-play games." However, just over a third of players had actually spent money on in-game items, currency, or battle passes in the 30 days prior to taking the survey.

You can find out more about how UK residents engaged with online services during 2020 by checking out the full Online Nation report.