User Experience (UX) is becoming very trendy albeit fairly new in the video game industry, so there are still a lot of misconceptions regarding what it is (and what it's not). Here are the 5 most common misconceptions.
Celia Hodent
Blogger
April 06, 2015

UX Invaders: We Come In Peace!

User Experience (UX) is becoming very trendy albeit fairly new in the video game industry, so there are still a lot of misconceptions regarding what it is (and what it’s not). I will try to tackle these misconceptions and convince you - if need be - that UX is indeed your friend.

To explain it in a nutshell, UX explores how it is like for the target audience (the players) to experience your game (and everything beyond, such as downloading the game, consulting forums, etc.). It uses neuroscience and psychology knowledge and applies game user research methodologies (e.g. playtests and analytics) to make sure that the game has good usability and is immersive (although I prefer to refer to it as gameflow).

When thinking about my experience advocating for UX (or neuroscience) in a game development team, there are 5 main misconceptions about UX I very frequently need to address:

The biggest misconception game developers have regarding UX practices is that they fear UX will hamper their creativity or distort the design intents or just make the game easier. Here is an example of a dialogue I’ve often had when explaining how to use UX guidelines:

GAME DEV: But!? What about Dark Souls?!!
ME: What about it?
GAME DEV: If we all follow UX guidelines, then all games are going to be friction-less and easy to play and hardcore games won’t exist anymore. You’re gonna kill Dark Souls!
ME: The only thing we want to kill is crappy interfaces or shitty interactions. So relax, we’re on your side!

The main purpose of UX practices is to offer the experience intended to the targeted audience. Therefore, if your audience is hardcore gamers and the experience you want for them is suffering, then UX guidelines will absolutely help you accomplish your sadistic goal. Hurray!

More seriously, one of the UX pillar - usability - is about removing friction and unwanted frustration. It’s not about distorting the intended experience, because this would affect the second UX pillar - engage-ability - which is in a nutshell about how enjoyable and engaging the game is [note: I used to call this pillar gameflow].

consider a horror game like Resident Evil. Let’s say that a user researcher is conducting a playtest with this game and observes the following: the players open a closet and a zombie surprisingly pops out of it to attack them. Most players observed try to move backwards but a table left by a vicious level designer is blocking their escape, so they panic trying to move around it. Well, if the experience intended by that game is to freak people out, then UX professionals are not likely to suggest to the designer to remove the table. The UX expert will discuss this "flag" with the designers and together they will define if it is an issue to address or not, depending on the experience intended.

We are here to help the developers convey their vision. So please do not fear us! 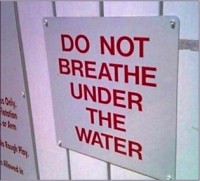 Yes, it’s true; UX feedback is probably going to highlight issues you already know about. Well, at least I’m hoping you have enough common sense and Human-Computer Interaction knowledge yourself to anticipate some problems. However, it’s always easier to spot common sense problems after the fact (that’s why it’s sooooo easy to criticize shipped games…). That's actually because of a cognitive bias called the hindsight bias. Many games ship with “common sense” UX issues (e.g. no or poor feedback when the player is interacting with something). It’s not necessarily because the developers missed them. Sometimes it’s because the issues are minor so we let them be until later, except that at some point it’s too late, we’re in a rush to ship, so the issues stay there. Sometimes, they are intended trade-offs that could maybe have been solved if tackled earlier. Also, sometimes, the developers get used to them and cease to see them as a friction points as experienced by a new player.

Not all UX recommendations are common sense though. The human brain is filled with perception, cognitive, and social biases that affect both the developers and the players (here are only a few examples of cognitive biases if you're curious). It’s for a reason that researchers from any field use very standardized protocols to test their hypotheses; and that’s because it’s very easy to miss or misinterpret what’s going on. For example, when we were testing Fortnite (an action/building game from Epic Games), players would sometimes complain that the common enemies in the game were too small so they couldn’t precisely aim and shoot them. If we had taken this feedback for granted we could have made the wrong decision to increase the size of the characters. Instead, we tested this hypothesis with as much rigor as possible given our specific constraints (game studios are no science labs) and we saw that in a controlled situation the players actually didn’t have problems shooting at the enemies, even when running at a good distance from the player. In fact, the aiming problems occurred when the enemies were going around obstacles; the pathing code was making them use a very sharp and unexpected turn angle.

Perception is a construction of the brain. UX will help you figure out faster and more precisely what the real problems are. You can check out my GDC 2015 talk to learn more about how neuroscience and psychology can impact design.

Misconception #3 – UX is yet another opinion

Game developers have to deal with many opinions; from within the game team, marketing team, publishing team, executive team, etc. They can therefore perceive UX feedback as yet another opinion they have to deal with. You might think, this is so annoying! However, UX processes are meant to test hypotheses through rigorous research and anticipate problems through analysis. UX experts do not give opinions, they provide an analysis based on their knowledge of the brain, past experience, and data when it's available. True, we don't always have clear data to back us up and we sometimes make educated guesses while in new situations. However, the beauty of UX is that we can quickly test our hypotheses until we find what is causing a problem and the best way to fix it. Also, we can anticipate problems that are harder to test until very late in the process. In that case, we carefully explore uncharted territories, for the brain, just like video games, is a very complex beast. Think about UX recommendations as doctor recommendations: we tell you to eat your vegetables. Yep, some people can live old and healthy without following a recommended diet, while others can be affected by terrible diseases even if they have a healthy lifestyle. However, overall, statistics tell us that eating vegetables will give us a greater chance to live longer and healthier.

That’s the reason why addressing UX feedback (through testing, expert review, analytics, etc.) should be prioritized over addressing feedback from other channels. If done correctly, this feedback is the least biased of all and will offer you recommendations from a neutral perspective, tailored for what you’re trying to accomplish (experience) and depending on your target audience (user).

Making games is hard. Very often, developers don't have a lot of resources to apply UX best practices. They don't have a lab and they don't have PhDs of sorts to provide them with UX expertise. However, the fact is, if you build up your game through only your perspective and if you never test anything, chances are that you will fail when it's too late and too costly to recover. Most developers won't ship a game before doing thorough QA testing, because we all understand how damaging a nasty bug can be for a game. Well, shipping a game with critical UX issues is just as damaging.

Even if you cannot afford a psychologist, user researchers, or a fancy lab, you can make sure you regularly adopt your audience’s perspective and test your design with people around you that don’t know about it (the checklist model I describe in my GDC Europe 2014 presentation can help you). It will help you find problems sooner, so you’ll iterate faster and better, and your game will have more chances to delight your audience (therefore make more money, allowing you to make more games) by providing a great experience. You can even start with paper prototypes to identify the biggest issues before implementing the feature, when it's very cheap to iterate. That's what UX designers do (in a simplified version): paper prototypes which they test with naive users, then interactive prototypes which they test again. Lastly, they implement a functional (and usually ugly) version, test again a few times, then when the interaction is nailed down, artists can art it up and make it compelling (a last test will be needed to see if art is conflicting with functionality, as this can happen). It seems tedious, but it's actually fairly cheap and will allow you to iterate much faster and more efficiently. I guarantee you that in the end you will have saved time and money while offering a more compelling experience to your players.

Misconception #5 – UX is separated from the design loop

Probably as a result of the previous misconceptions, UX is very often perceived as being separated from the design loop. It's often seen as being the concern of user researchers or psychologists only. In that case, the dev team tends to iterate within a closed circle (sometimes taking input from marketing or executives). UX experts on the other hand will want to test the game early, do iterative cycles, and make sure that the features added first are truly the important ones given the desired experience. So they wave to the core team and ask if they can start testing and collaborating. Usually, the answer they receive is: "Nooooo! Are you crazy? It's not ready yet! It's broken, ugly ... go away!". The danger is that the game ends up being tested and evaluated too late, when only quick patches can be done before the game ships. 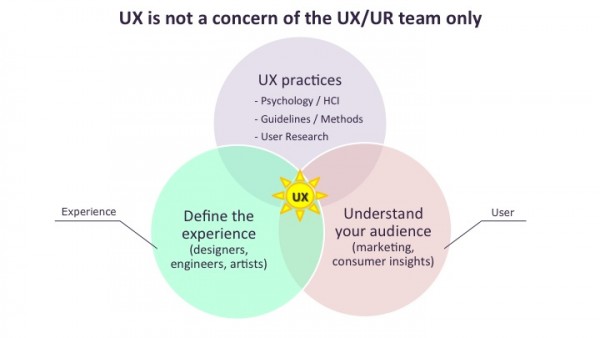 There's always something that can be tested or evaluated, even early on. Trust your UX representatives to help you figure that out but make no mistake: UX should be a concern of everyone in the studio, not only the concern of a separate team. UX experts are only here to guide you to ask the correct questions at the right time and figure out a way to test your hypotheses. We don't "UX this" at some point after the architecture and important decisions about the game are made.

UX practices are here to help you nail the experience you want to offer to a specific audience. It will help you avoid the "curse of knowledge" that happens when you know the game you're building too well and cease to see the problems a new player will experience.

User Experience is a philosophy more than anything else, it’s all about shifting from our ego-centered perspective and instead using a scientific approach. It’s about not forgetting to have empathy for our audience, and being generous.

If you're interested in learning more about game ux, I invite you to check out my book The Gamer's Bain: How Neuroscience and UX Can Impact Video Game Design