Bethesda is suing Warner Bros. over the recently released Westworld mobile game, alleging that the Behaviour-developed game is based on code from Fallout Shelter.
Alissa McAloon
Editor-in-Chief
June 22, 2018

Bethesda has filed a lawsuit against Warner Bros. and Behaviour Interactive, accusing the duo of copyright infringement, misappropriation of trade secrets, deceptive business practices, and unfair competition, all of which stem from the recent release of the Behaviour-developed Westworld mobile game.

While a lawsuit like this between two major game companies is notable in its own right, one of the particularly interesting facets of this latest suit is how Bethesda claims that a number of bugs present in the Westworld game mirror bugs that showed up in Fallout Shelter’s early builds, something the company says is a dead giveaway that the code was stolen.

The lawsuit itself, as discovered by Polygon, also calls out the Westworld game for having “the same or highly similar game design, art style, animations, features, and other gameplay elements “ as Fallout Shelter.

For a little bit of background, Behaviour Interactive was contracted by Bethesda to work on the Fallout Shelter mobile game that released back in 2015. The agreement between the two companies, as laid out by Bethesda’s legal representation, tasked Behaviour with developing Fallout Shelter to Bethesda’s specifications, giving Bethesda ownership of “Behaviour work product of any kind, including code, designs, artwork, layouts, and other assets and materials” created for the game. 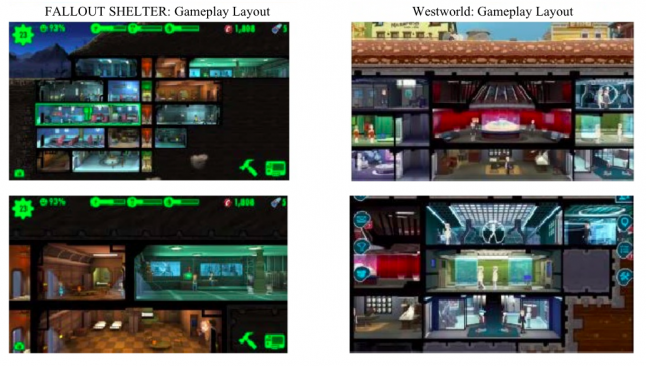 Bethesda is now accusing Behaviour of using those earlier Fallout Shelter resources to create Warner Bros’ Westworld mobile game to “quickly bring the Westworld game to market,” something it says is made evident by both the similar looks of the two games (cartoonish characters amid 3D backgrounds) and a particular bug found in the current version of the Westworld game.

“This software ‘bug’ appears when a player starts up the demonstration version of the Westworld game,” alleges the lawsuit. “Specifically, the view is out-of-focus and the scene that appears is far to the right and below the targeted landscape image. It is as if a camera capturing the scene had been inadvertently pointed to the lower right foreground and then slowly refocuses on the central image.”

The lawsuit, which can be read in full here, dives into further detail on why Bethesda believes the Westworld game to be infringing on Fallout Shelter’s design in several pages of side-by-side comparisons of the two games.

The suit itself seeks to have “each and every version” of the Westworld mobile game removed from distribution, as well as an end to development and support for the title. Additionally, Bethesda is asking for damages for “willful copyright infringement” in an amount to be determined at trial, damages “in an amount to make [Bethesda] whole from the effects of” the alleged unlawful acts in their entirety, and for Warner Bros and Behaviour to cover legal fees and punitive damages.