Star Control designers Paul Reiche III and Robert Frederick Ford have defended their decision to issue a DMCA takedown against Star Control: Origins, which resulted in the title being pulled from sale earlier this week.

Origins developer Stardock has been engaged in a lengthy legal battle with Reiche and Ford over the trademarks and copyrights to the Star Control franchise, and criticized the duo for choosing to "bypass" the legal system "by issuing vague DMCA take-down notices to Steam and GOG."

"We attempted to get a preliminary art injunction to prevent them from issuing more false DMCA take down notices. Unfortunately, the court ruled that it wasn't the courts' place to intervene in the area of DMCAs. Thus, here we are." wrote Stardock on the Steam forums.

"To my knowledge, never in the history of our industry has anyone attempted to use the DMCA system to take down a shipping game before. For those not familiar with copyright law, you cannot copyright ideas, individual or short phrases, concepts, mechanics, or game designs."

With Stardock having said its piece, Reiche and Ford have now shared their version of events, and reiterated their view that Star Control: Origins is "substantially similar" to their work on Star Control II.

Starting from the top, the designers confirmed they agreed to refrain from serving new DMCA notices while a judge looked at an injunction filed by Stardock, but that after the studio's motion was denied, they had every right to push forward with their DMCA takedown against Origins.

"As you might guess, we are going to continue defending our copyrights against what we feel and contend in the lawsuit is infringement by Stardock, so we served new DMCA notices late last week," commented Reiche and Ford.

"[Stardock CEO] Brad Wardell has said repeatedly 'you can’t copyright a word' which seems to mean that that if you break down creative work into its component parts, those component parts are too trivial to be protected.

"Of course that’s crazy. Copyright protects original literary and artistic works that are simply specific combination of words, or images, or other content."

The pair also emphasized the importance of understanding what Stardock actually purchased when it acquired the 'Star Control Franchise' in Atari's bankruptcy auction. Indeed, they claim Stardock only actually bought the registration to the trademark 'Star Control,' and the copyright to the original parts of Star Control 3.

"The bankruptcy paperwork was very specific that anything not listed was excluded. Not Star Control, Star Control II, the unreleased Star Control 4, packaging art -- none of that was included in the auction," they added.

Getting to the nitty gritty, the duo also claim Stardock received a copy of their 1998 contract with Star Control 3 developer Accolade so it could understand the exact terms under which material had been licensed.

That contract apparently didn't grant any additional property to Stardock, but the studio now claims it holds all of Accolade's rights and has also applied for "tons of trademarks" on the names of aliens Reiche and Ford invented in Star Control and Star Control II.

"Besides the evidence of infringement identified in our most recent filings with the court, let’s compare the expression in a very limited part of the gameplay -- interstellar travel. One would presume that Stardock would either make entirely new gameplay for Origins or base it upon the original parts of SC3," they wrote, referencing the comparison table pictured below.

"We see many such examples in Star Control: Origins where its expression is substantially similar to and/or derivative of our copyright-protected work, without our permission." 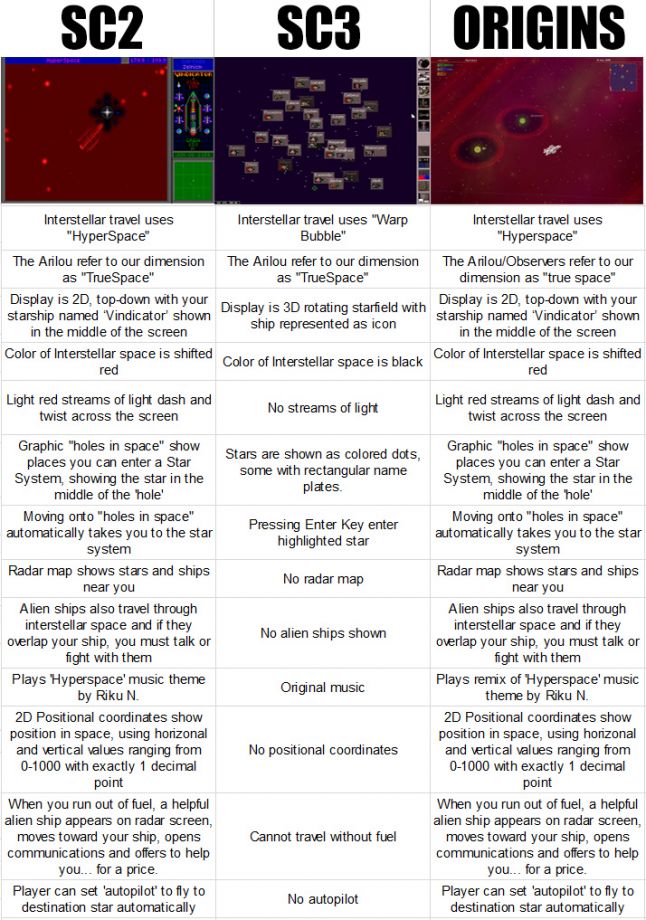