How do you stop players from cheating in your multiplayer game? If you're Daybreak chief John Smedley, you apparently call for banned players to publicly apologize to those they wronged in return for the chance to be pardoned and allowed back into your game.

It's an intriguing approach to combating an endemic problem in multiplayer game design. Daybreak has so far done what most studios do to discourage cheating: ban players believed to be hacking.

This week Smedley took to Twitter to estimate that roughly 30,000 H1Z1 players were recently banned, but he also offered those affected a path to salvation: publish a public apology video on YouTube and show it to Daybreak before a certain deadline (noon Pacific today).

A number of banned players took him up on that, and Smedley claims to have pardoned 5 of them after sharing their videos (one of which is embedded above) on Twitter. If they get caught cheating again, they're banned for good. 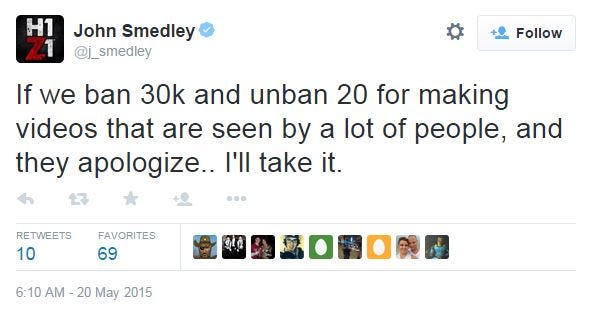