Crowfall, and saving the MMO from 'stagnation'

Can two MMO veterans save the genre from itself? That's the question that drives Crowfall, the title from Gordon Walton and J. Todd Coleman that seeks to "upset the applecart" of the genre.
Christian Nutt
Blogger
February 24, 2015

The MMO. Can it be saved from itself? The genre is synonymous with massive success -- rarely. More often, it's earned a reputation for persistent mediocrity, as hyped titles come on strong and soon fade from popular consciousness.

That's because they're all measured against the yardstick of World of Warcraft. Maybe it's time to try something different.

Gordon Walton and J. Todd Coleman have been there since the genre's early days. With titles like Ultima Online and Star Wars: The Old Republic (Walton) and Shadowbane and Wizard 101 (Coleman) in their rearview, they've now decided to dramatically change their approach to the genre (at new studio, ArtCraft) and make a "pretty hardcore game for people who want a visceral game experience," Walton says.

That game is Crowfall, and its Kickstarter campaign is live today.

The two are avoiding the large publisher route and plan, instead, to "break the thought patterns around the MMO genre," in Walton's words. "What can we do that'll upset the applecart?" 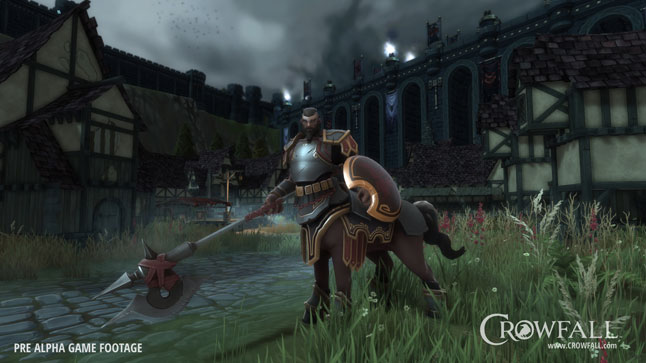 No more aping World of Warcraft

So their first step is to throw out the design wisdom of World of Warcraft "by going back to the beginning" of the genre, when its creative potential seemed so huge. "Something was lost," Coleman says. "We've seen a lot of stagnation."

He sees "fertile ground... that we never fully developed." The plan is to create a strategy/MMO hybrid title, cognizant of the inherent differences between the genres -- a game that continually provides "that initial rush, that initial adrenaline feeling of mystery and awe and exploration, and jockeying for power and position," Coleman says.

While it'll be a tough sell for players who like "theme park" MMOs, the idea is to "right-size" the game, Walton says, for a sustainable niche of players. And that's because "when you do big games, it forces you to be more conservative. It forces you to try and hedge your bets," he says. Coleman says the two have been "burned" by that mentality.

Crowfall will be "dramatically cheaper than anything I built since 1999," says Walton, because it's a systems-based game, like EVE Online, where the players serve as the content for each other. Hand-authored quests? Nope.

"You have a homeworld, and you go off on crusade, and when you come back from crusade you bring back the spoils and build up your kingdom," Coleman says.

A fully player-driven economy will keep the battles raging, because resources are crucial for progressing in the persistent parts of the game. Players won't be able to buy items they need -- all must be acquired through play, one way or another.

"The strategy layer [is] connected directly to a player-driven economy," Coleman says, and veteran MMO designer Raph Koster is consulting on the title to help design that economy.

Crowfall is built with Unity; its destructible world utilizes Voxel Farm's technology, and the server back-end is built by an ex-BioWare Austin coder who brings years of experience (and, already, years of independent work on that infrastructure) to the table.

"Every MMO I ever had to work on, we built our own tech, almost from scratch," Walton says. "These huge costs in time and money are not there anymore." 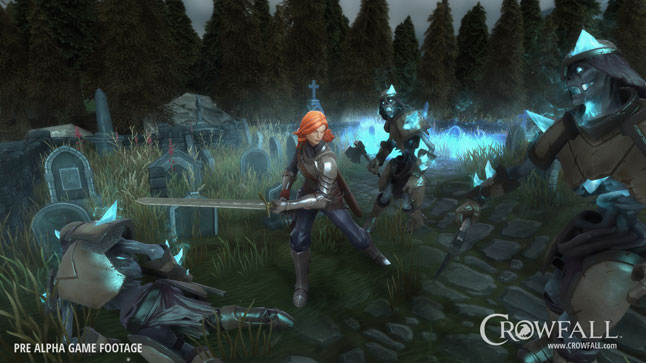 Finding that niche, and building that game

To gauge interest for the title, the pair is running a Kickstarter campaign. The funding is important -- particularly if Crowfall takes off. But it's not the main goal.

"If we can prove that we can get five to 10,000 backers now, that shows there's a market out there for 50 or 100,000 players -- once we have something that they can play," Coleman says. "The MMO market is large enough now that we should be able to find a niche."

The two booted up the company by investing their own money. "This is to some degree a leap of faith; it's one that Gordon and I took first," Coleman says. "I'm deep into it. I'm all-in." He does, understand, however, that a wait-and-see approach is "valid" these days, given recent crowdfunding disappointments.

"We're realistic about the getting it done part," Walton continues. "While Todd is very creative, he's also very grounded on the production side. He knows what it means to get stuff made, and I'm a nuts-and-bolts guy."

Walton, however, thinks the team can pull it off, by thinking strategically.

"We're just going to ship our game in modules, just like [Star Citizen's] Chris Roberts. We're going to look at that as our iteration capability, and we have a roadmap of how we're going to roll the game out over a couple of years."

Coleman took an iterative approach for Wizard 101, so he knows the ropes of gradually building a live game.  "Growing into it like that seems much better to me... if your trajectory is good the game just gets stronger, and stronger, and stronger," he says. "We're going to get them in, get them testing -- and believe me, they will let us know what they don't like."

The game will also be single-purchase, play-forever (ala Guild Wars) with an optional subscription that adds convenience factors (like EVE Online.) There will be no pay-to-win microtransactions, either -- just cosmetic ones.

"Our customers in aggregate are kind of jaded," Walton allows. "They've been through a lot of MMOs that promised a lot of things, and nickled-and-dimed them to death. We're counter-promising against that."

"In truth we want them to be happy, because it's the retention thing that makes it work," Walton says. "The source of all the goodness that comes is from community."

"It's like a church -- it's the congregation. That's the church, right? Not the building," Coleman adds.