User Research: Do players complain about weak characters because of too little damage?

Skills adjustment planning is often very careful. Because the adjustment of characters will have some collateral effect on other characters/heroes, which in turn leads to the potential affection of character balance of the entire game.
Yongcheng Liu
Blogger
September 23, 2021

"Hey, designers, this character’s skill is too weak, simply has no presence in battles, please do some strengthening", " XX character got too little damages, players gave feedbacks of not killing enemies using him". In players’ game experience, the feedback about the strength of certain characters has always occupied a high proportion.

However, skills adjustment planning is often very careful. Because the adjustment of characters will have some collateral effect on other characters/heroes, which in turn leads to the potential affection of character balance of the entire game. And the numerical setup of the characters in online games should not be adjusted frequently. Therefore, generally in making parameter/numerical adjustment decisions in characters, you need to use a large number of big data analyses of the game. So how exactly should designers plan and decide whether or not to adjust the numerical of certain characters when they get these feedback from the players?

This article will share the reasons why players gave players feedback of certain characters are too weak. Besides, I will cover some thoughts on numerical adjustment which hopefully give insights to designers of online games.

Firstly, let's break down the process of players experiencing a new character and take a look at the process of how players see characters in terms of their strengths and weaknesses:

Often, players and even researchers start with the preconceived notion that the problem is in the last step, which means that there is a problem with the numerical settings of the character itself, causing the failure to hit and deal damages or die easily. This is why they often give suggestions to improve the damage of the character. But in fact, the problem with any of the above steps will potentially lead players to have a wrong judgment about the strength of characters. According to the process which I break down, we can split the problems in the process into the following 4 categories:

For example, in the Ghost Mobile, there is a Shadow Spirit which has 3 different forms: melee, long-range, treatment support. In the early promotion of this new Shadow Spirit, marketing activities were more focused on the switch of the 3 different forms. Players who see the promotion before can easily think that this sub-character is all-around, ACE character with melee, long-ranged damage and healings. But in fact, these 3 forms are not totally free to switch. Due to the long cooldown, in a battle, it is expected to switch for only 2-3 times among different forms, which makes players harder to deal damage at any time and then just heal themselves without dying. The design of this sub-character is not expected to be all-around, and the advantage of her is that it allows players to adapt to more scenarios and to freely choose their preferred forms.

Without understanding the actual positioning of the character, players actually found that her damage is not the top, whilst the support & heal function is not a must, which makes the new character’s positioning in-game not as clear as promoted. And that brought a lot of negative feedback. This is a typical problem caused by high expectations and cognitive bias of the strength of character positioning.

For this type of problem, it is not the strength of the character that needs to be adjusted, but the management of expectations from the players.

For this type of problem, how we generally positioned it? In addition to qualitative feedback from players, we often use the quantitative diagnosis method, of which the aim is to understand the expected strength of a character and actual experience of players through questionnaires, to see whether there is a significant gap between the two. 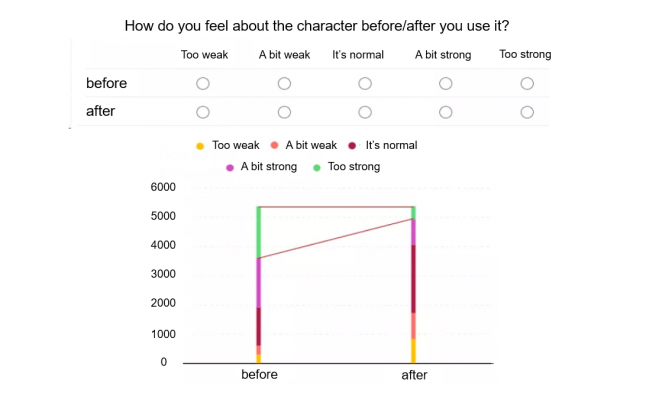 This type of problem occurs in step 3. For example, the newly released character in Tianyu Mobile, Yantian achieves headshot damage when you first use the normal basic attack to stack up for hemorrhage times (each time of hemorrhage brings additional damage, and the more times of bleeding, the higher the damage), and then use the two additional damage skills. And after that, players can do sniping to deal a ton of damage with a headshot. Some players just started to play without knowing the way to perform headshot successfully, and some of them just start sniping randomly, which causes greatly reduced damage. And that would promote potentially cause negative feedback in terms of character strengths and weaknesses.

For this type of problem caused by the fact of players thinking that the character is too weak, it is necessary to improve player experience by strengthening the guidance of how to use specific characters to deal damages. In some cases, designers will also take the initiative to simplify the mechanism of dealing damage to reduce the cognitive burden of players. For example, similar to the above-mentioned stack-up skills of characters, it can only be achieved with two specific skills to stack up times. But changes could be made to the mechanism of stacking by any damage skills/attacks, which simplifies the headshot and damage loop.

For the diagnosis of this type of problem, we generally use quantitative data on the frequency of player skill use in dungeons and PVP mode to see if the player is using skills as expected or not and if they were using the wrong skills. For some characters that need buffs, we also use buff-related data to diagnose whether players are properly utilizing the mechanism of buffs.

This type of problem occurs probably in step 4. For example, the above-mentioned the Ghost's character, Shadow Spirit, if the main play form is the Song of Moon, of which the immobilization is of great importance in its core damage loop. On one hand, it is because control is the core skill of Shadow Spirit, and on the other hand, immobilizing is essential to ensure that the damage could be dealt smoothly. Then for Shadow Spirit players who play the form of the Song of Moon, immobilization abilities should be upgraded with higher priorities. However, in the game the Ghost, immobilization is not the main control ability that most players would prioritize.

Therefore, when we actually look at the abilities attribution of those who gave feedback on the low damage of the Song of Moon, we found almost all of them had lower ability in immobilizing. In addition, different types of damage modes of characters make their ability preference to be different. For example, for characters who are able to deal explosive and instant damage, the ability of critical damage brings great battle advantage; a more stable damage type needs higher attack in numerical to improve the overall damage level within a certain time. Therefore, if the core ability attribution of the character is not in the right direction, it will also lead to a situation where the expected strength of the specific character cannot play its role in-game.

The solution to this type of problem is also generally by publishing official play & battle tips, or guidance made by top players. Besides, a game's ability attribution rankings also play a role in guiding players by offering attribution of the highly skilled players and game masters. Usually, after the release of the new characters, players will take 1~2 weeks to get used to it, and designers might start to consider real adjustments about the numerical strength of the character since then. It takes time for players to be a bit more familiar with the skills, damages, and how to develop the specific character which might probably be different from the former ones. If the character is strengthened or nerfed based on the win rate data that players experience for only a few days, the following situation happens frequently: after players are familiar with the skills and get more ideas of how they use it, the character just gets nerfed, and it will just bring more negative feedbacks.

For the diagnosis of this type of problem, what I did is directly seeing the numerical data of the attribution of the players playing each character. And it might be intuitive to know what the bias of attribution is of each character development, and whether they are in a positive direction. 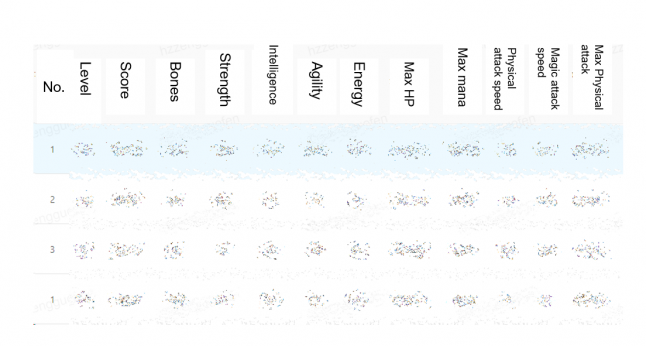 But even if the problem is on the character itself, it is not solved by simply increasing the skill damage to improve the character strength in many cases.

Before the release of a new character, designers tend to do a lot of testing. And in most cases, the real performance of the specific character will not be too far from the expected. However, the followings are not easy to cover through internal testing: the complex battles which keep changing, as well as a variety of different mechanisms in dungeons. For example, 1v1 game situation is relatively simple, and the damage can easily be dealt with under simple situations; on the other hand, if it is in a group battle or 5v5 PvP, players will face multiple opponents’ firepower, plus controls, damage-dealing environment becomes very poor, and it is difficult to deal the expected damage. In addition, most designers are masters of the game mechanism, and they often easily overestimate players’ reaction time, level of control, which lead to the design of greater demands on players’ control ability. And it tends to result in a situation where players cannot achieve what is expected by designers upon the official release of a character.

This type of problem could potentially be solved not by simply improving the damage numerical settings, but by optimizing the damage-dealing environment or reducing the damage-dealing control difficulty. For example, for characters who need more skill combos to achieve higher damage or characters with stack-up mechanism, their controls are easy to be interrupted resulting in the underperforming damage. In this situation, designers could consider adding displacement immunity or enhancing control time (control an opponent first to ensure that damage dealing is not easily interrupted).

For the diagnosis of this type of problem, you can look at the actual values of the character in dungeons or at PvP stages to see if the character performance meets the expectations. Common indicators are total damage, DPS, damage taken, healing; the number of kills (to judge whether it carries the game), the number of death (indicates survival environment). For example, to see whether the damage of a character is in the right direction, we can look at the total damage of specific character and the number of kills, and how they rank in the ranking compared with other characters; in dungeons, it’s normal to look at DPS, which can be convenient and persuasive to see whether there is a gap between the actual and the expected damage capacity of the specific character.

To sum up, when players give feedback saying that their character is way too weak, it is not necessarily a problem with the design of the character itself. It is necessary to determine whether the player has a certain cognitive bias in terms of the character and if the bias is caused by the fact that they are unfamiliar with the character skills, ability attribution, and etc. Finding the root cause of problems makes it easier to provide supportive solutions respectively.