This week's highlights include a multitude of 'best of' lists of the top games of the year - from video through group round-ups to individual highlights.
Simon Carless
Blogger
December 24, 2018 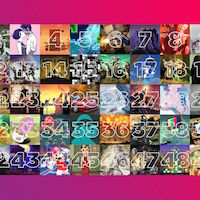 This week's highlights include a multitude of 'best of' lists of the top games of the year - from video through group round-ups to individual highlights. And there's also pieces on the current (The Outer Worlds & Atlas) and classic (NES history, the quarter-century of Digital Extremes), among others.

Happy holidays to you and yours, by the way! Hope you're having a wonderful one - with a little time off to click on links about video games.

Staying With Power: 35 Years of NES History - Museum Tour (Kelsey Lewin / YouTube - VIDEO)
"Helping plan and curate the museum at the Portland Retro Gaming Expo was one of my favorite things I’ve done this year. This video is the guided tour that we never quite got to give — with lots of history and extra information. I also included a bit about our planning process and challenges we faced at the end if that sort of thing interests you. [SIMON'S NOTE: masterminded by the Video Game History Foundation's Frank Cifaldi, Kelsey, and many others besides, this was an AMAZING pop-up museum exhibit!]"

The creators of The Outer Worlds on learning to make better RPGs (Wes Fenlon / PC Gamer - ARTICLE)
"I recently visited Obsidian Entertainment to see the studio's new RPG The Outer Worlds, which I called a blend of Firefly and Fallout... You can read a lot more about The Outer Worlds in my feature, but I also talked to Tim and Leonard about their careers making RPGs, and how that experience and working at Obsidian is affecting this new game. Here's what they had to say."

The brilliance of video game maps (Various / Eurogamer - ARTICLE)
"Hello! Earlier this year, Thames and Hudson published a beautiful book on literary maps. It's called The Writer's Map: An Atlas of Imaginary Lands... A few of us ordered the book to arrive on day one. And as we read through it, our thoughts inevitably turned to video games and their own relationships with maps. Below you'll find some of the things we ended up thinking about."

Atlas is a pirate MMO where players run the seas (Matt Cox / RockPaperShotgun - ARTICLE)
"There’s a pirate MMO on the horizon, and its sea-farers look ambitious... I spoke to project director/lead programmer Jeremy Stieglitz and creative director Jesse Rapczak over Skype. We chatted about singing to stave off boredom on voyages, player politicking, ship combat as a team sports game – and a plan to save every player before they die of old age."

Heavily Pixelated: S01:E07 - Shane (Heavily Pixelated - PODCAST)
"Hosted by veteran writer and TV host Scott C. Jones, Heavily Pixelated examines the moments when gamers are at their most vulnerable, and the ways video games helped them endure those difficult moments. Half Freudian-style therapy session, half celebration of a particular video game,.. When his parents separate, Shane uses a vintage NES game to reunite his newly fractured family."

Xbox is poised to dominate the next console generation (Jessica Conditt / Engadget - ARTICLE)
"Well, this is certainly a surprise. Xbox has been the bumbling underdog of the eighth console generation, playing catch-up to Sony's PlayStation 4 and watching from a distance as the Nintendo Switch reignited the passion of video game fans worldwide. However, over the past five years, Microsoft has doggedly climbed its way out of a PR and reputation pit with items like the Xbox One X and the Adaptive Controller as well as its public support of cross-console play."

From Epic Pinball to Warframe: 25 years of Digital Extremes (Tom Senior / PC Gamer - ARTICLE)
"Today Digital Extremes is known for its big free-to-play hit shooter, Warframe, but the studio has been around since PC gaming's early days... Founder James Schmalz started out learning coding tidbits from magazines before working alongside Epic luminaries Tim Sweeney and Mark Rein. DE's story is one of a studio that has fought hard for the opportunity to create its own property in an industry that's often tough on mid-sized independent developers trying to break out."

The 15 Best Video Games Of 2018 (Andrew Webster / The Verge - ARTICLE)
"It’s hard to top a year like 2017... But this year was also surprisingly strong, offering up an incredibly varied mix of interactive experiences. There are the blockbusters, of course, like the free-wheeling Spider-Man and the meticulously detailed Red Dead Redemption 2. But 2018 was also a fantastic year for smaller games."

Market correction in esports? (Ben Fischer / Sports Business Journal - ARTICLE)
"Esports insiders are increasingly convinced that many team organizations are overvalued and a market correction is coming. In the two years since traditional sports teams started acquiring esports organizations, faith in the long-term potential of video games has grown stronger. But pessimism about the short- and medium-term prospects of esports teams is also growing, as spending pressures grow faster than revenue."

Gamasutra's Best of 2018: Bryant Francis' top 10 games (Bryant Francis / Gamasutra - ARTICLE)
"Amidst all the challenges, a lot of great developers put out some seriously great games this year, and we're getting a lot of chances at Gamasutra to celebrate them this week. Today, here's some of the games that your humble contributing editor/video producer has truly enjoyed in 2018. [SIMON'S NOTE: also see some really well-considered lists from my other colleagues, including from Chris Kerr, from Alissa McAloon, from Alex Wawro, from Emma Kidwell, and from Kris Graft.]"

The 50 best games of 2018 (Polygon staff / Polygon - ARTICLE)
"A list of the best games of the year is more useful, more thoughtful and more complete, we believe, if it accumulates all year long. That’s why we made a change. Throughout the year, the Polygon team collected its game of the year list in real time. We updated the list as new games made the cut. Now, with 2018 in the books, we’ve reorganized that list, ranking entries into a Top 50."

'They make him feel normal' – the role of video games in a children's hospice (Keith Stuart / The Guardian - ARTICLE)
"I’m watching Shay play video games in a big, bright social area at the Keech children’s hospice in Luton, where he is a regular and very enthusiastic visitor. “Whenever he comes here, I know the staff need a rest when he leaves,” says his father, Alan. “He’s a character. In a way, the disability has made him who he is – with the family sarcasm added on.”"

Tim Rogers Roasts The 2018 Games Of The Year (Tim Rogers / Kotaku - VIDEO)
"So, so many good video games came out in 2018 that I knew for sure I wanted to do a video about my favorite games of the year. However, I didn't have time to also do a "worst" games of the year video. So I decided to combine the two ideas: click play and listen to me say the worst, most bluntly honest things I can think of to say about my absolute favorite games of 2018."

Heroes of the Storm eulogy: For once, Blizzard couldn’t balance the casual and competitive (Rowan Kaiser / Venturebeat - ARTICLE)
"Heroes of the Storm isn’t dead. But it isn’t alive, either. Blizzard Entertainment’s announcement this week that it was ending Heroes esports entirely, shifting developers off the game, and “changing the cadence” of updates effectively stated that the game was shifting away from active development. The maudlin tone of the piece, even though it said the game was continuing development, made it fairly clear: Blizzard will support Heroes as it is for a while, but it’s halting its attempts to make it a hit."

In 2018, Video Game Developers Took Unionization Seriously (Dante Douglas / Waypoint - ARTICLE)
"At the Game Developers Conference in March of this year, International Game Developers Association chair Jen McLean—along with other representatives of the IGDA—were met at a roundtable with a standing-room-only crowd eager to speak loudly about issues that had been too often relegated to whispered asides and quiet addendums. Crunch. Gendered pay parity. Workplace culture. Frustrations that had been long considered untouchable by game development culture."

‘Fortnite’ Dance Lawsuits: The Carlton, the Floss, the Milly Rock, What Is Going On? (Brian Crecente / Variety - ARTICLE)
"When is a dance a dance and not just a move, and can you copyright it? That seems to be the lynchpin question in a series of lawsuits filed this month against “Fortnite” creator Epic Games by a rapper, an actor, and an Instagram star."

How Crowfall is trying to redefine open world PvP in MMOs (Steven Messner / PC Gamer - ARTICLE)
"Crowfall, which was first kickstarted to the tune of $1.7 million back in 2015, is an ambitious PvP-centric MMO with one unique twist: Eventually one side reigns supreme. Instead of having persistent servers where players are expected to make characters that last indefinitely while fighting an endless tug of war, Crowfall centers around impermanent campaigns that span weeks to (eventually) months."

Welcome to Hades - Developing Hell Episode #1 (Noclip / YouTube - VIDEO)
"In the first episode of our series covering the development of Hades, we meet the team at Supergiant Games who are preparing to launch in early access and finish their announcement trailer. All in preparation for Hades' secret public debut at The Game Awards."