This week's highlights include a look at fallout from Blizzard's 'Hong Kong censorship' controversy, new titles including Concrete Genie, Neo Cab, and John Wick Hex, plus a great look at the reality of indie game sales and lots more.
Simon Carless
Blogger
October 12, 2019 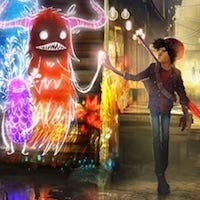 This week's highlights include a look at fallout from Blizzard's 'Hong Kong censorship' controversy, new titles including Concrete Genie, Neo Cab, and John Wick Hex, plus a great look at the reality of indie game sales and lots more.

Thanks for reading, and hope you're digging all the great content out there. BTW, hit me up if you think there's outlets I should be using more in these weekly roundups! Always like to hear about neglected (by me!) sites or YouTube channels.

John Wick Hex game review: Become the bloody Baba Yaga of legend (Sam Machkovech / Ars Technica - ARTICLE)
"The first true game based on the series, John Wick Hex, answers this quandary with a clever angle. The films' hero has an uncanny ability to scan and understand an entire room full of bad guys like he's a supercomputer. If he can figuratively slow time down and pick off his foes with precision, couldn't the video game version do the same? [SIMON'S NOTE: also see this review from The Verge.]"

The First Video Game (Ahoy / YouTube - VIDEO)
"[SIMON'S NOTE: this super high quality YouTuber doesn't cover games much, but when he does, prepare to be impressed by the visual quality in this hour-long (!) doc.]"

Behind the HONK: An Untitled Goose Game Q&A (John Harris / Gamasutra - ARTICLE)
"Everyone seems to be honking a bit more than usual with the recent release of House House's brilliant Untitled Goose Game, a game where you take control of a horrible goose who terrorizes the unwitting members of a small town. House House's Nico Disseldorp, programmer on the game, recently answered our goose-related questions."

CEDEC 2018 talk: 20 Years of Game Graphics Evolution and Beyond (Arc Hound / Tumblr - ARTICLE)
"The following is a translation of a speech that was held on the second day of the CEDEC 2018 conference held on August 23, 2018 at Kanagawa, in which three veteran developers, Takashi Atsushi of Sega Games, Yuji Yamada of Sony Interactive Entertainment Worldwide and Yoshihito Iwanaga of Bandai-Namco Studios reflect on their various works in the industry during their past 20 years..."

The Best Video Games of 2019 (So Far) (Brian Feldman / Vulture - ARTICLE)
"In some ways, 2019 feels like a placeholder year. Many of the biggest upcoming releases (cough, Cyberpunk 2077, cough) have slipped to 2020. A lot of big publishers and studios are clearly in a holding pattern, developing as-yet-unannounced titles for the new PlayStation and Xbox consoles slated to launch next year. This is not to say that there haven’t been great games this year; there have."

My land of make believe: life after The Sims (Liv Siddall / The Guardian - ARTICLE)
"I tried exercising. I tried having more meetings. I tried structure. But nothing seemed to dissipate a niggling, hollow feeling of worry. Then I downloaded a new-ish version of The Sims, the popular simulation game. Bingo. It was like putting Vaseline on chapped lips."

Neo Cab is the dystopian gig-economy Crazy Taxi we’ve always wanted (Sam Machkovech / Ars Technica - ARTICLE)
"Though the game swims in incredible atmosphere and hinges on a cool premise—you're a gig-economy taxi driver in a dystopian future, determined to uncover a mystery—this isn't a steering-wheel drive through busy streets. Think of Neo Cab as "Emotional Conversation Taxi," not the arcade classic Crazy Taxi."

Indie game makers open up about the money they actually make (Lewis Gordon / The Verge - ARTICLE)
"Burford’s situation stands in sharp relief to the enduring image of the indie auteur, those who struck critical and commercial gold following 2008’s “indie boom.” Despite the era’s failures numerically dwarfing its successes, we still seem fixated on this long-standing stereotype. Truthfully, many indie developers — from the makers of weird alternative games to more traditional entertainment products — sit somewhere in the middle. [SIMON'S NOTE: this is an important piece.]"

Tales from inside Sega AM2's top-secret studio (Martin Robinson / Eurogamer - ARTICLE)
"There's a lot of history in that old building, and over its last few months Hiroshi Kawaguchi was rifling through much of it. He's part of that history himself, really, having come to work at that office for the past 35 years, and having contributed to some of the defining moments of Sega's history. This is the man that composed Magical Sound Shower, Passing Breeze and Splash Wave - those anthems for blue skies - and so much more besides. [SIMON'S NOTE: more great Sega history from Eurogamer this week.]"

The Conquest of Ale: Anarcho-Communism in Dwarf Fortress (Huntress X Thompson / YouTube - VIDEO)
"Come learn about what Dwarf Fortress, John Carpenter's Prince of Darkness, and anarcho-communism all have in common!"

The Gaming Library That Helped a Neglected Neighborhood Find a New Identity (Kimberly Koenig / VICE - ARTICLE)
"Indie game developer Pedro Oliveira grew up in the Chelas slum and experienced the downside to its destruction. For all its challenges, he fondly recalls communal life in the “wooden barracks.” This is where he shared toys with other children when his mother couldn’t afford them."

How Hypnospace Outlaw's 1990s internet was made (Alex Wiltshire / RockPaperShotgun - ARTICLE)
"But it’s also a game, so its wild thickets of pages, all written by distinct personalities, are also navigable and carefully laced with puzzles to figure out. How did did the three-strong team behind Hypnospace Outlaw make something so playable out of something so chaotic? The answer lay in looking at how the early internet worked."

The 30 best video games of the decade, ranked (Mark Serrels / CNET - ARTICLE)
"We've tried to cover it all. You'll almost certainly disagree with some of this list, and you'll have your own ideas about what was "best," but we're sure you'll agree: The 2010s was a very good decade for video games."

Deep Dive: Telling Lies - Making a mechanic out of scrubbing video (Sam Barlow / Gamasutra - ARTICLE)
"In deciding to follow up Her Story, I was interested in really digging into the core idea of exploring video and adding further layers of expression and choice into the central mechanic. Despite being a spiritual successor of sorts, the game also has a very different tone, scale and subject matter to Her Story and I wanted the mechanic to be an important part of expressing that."

You Can Take an Arrow to the Knee and Still Be an Adventurer (Cherry Thompson / GDC / YouTube - VIDEO)
"In this 2019 GDC talk, Cherry Thompson explores why disabled representation is so powerful, why the industry keeps getting it so wrong and how game designers might be able to do better in the future."

Concrete Genie Takes Too Long To Get To The Fun Stuff (Natalie Degraffinried / Kotaku - ARTICLE)
"The gameplay never quite lives up to the loving design of the ramshackle town. After maybe 10 hours scouring for secrets and messing around in free play mode, I wasn’t pulling my hair out. I just got a little bored with it. That did make it painful when I reached the short-lived final act, a total upturning of its mechanics, and realized that the gameplay was actually getting good."

We Talked to 'Hearthstone' Pro Players Who Are Quitting the Game In Protest (Patrick Klepek / VICE - ARTICLE)
"Ever since Blizzard suspended Hearthstone pro Chung “Blitzchung” Ng Wai on Tuesday for speaking up in support of Hong Kong’s ongoing political protests, the company has been quiet. But the esports machine keep grinding, and yesterday, the previously scheduled American Collegiate Hearthstone Championship was underway."

Surf Like A Shark (Ernie Smith / Tedium - ARTICLE)
"That time the company behind the GameShark cheating device came up with a dial-up online service for the Nintendo 64. SharkWire strangely targeted 7-year-olds."

I'm Relentlessly Greedy In Grindstone, And It Makes Things Thrilling (Chris Pereira / GameSpot - ARTICLE)
"Aside from dabbling in What The Golf and Card of Darkness, Grindstone remains my go-to mobile game a month after launch, and I've developed what feels like an unusual strategy for a puzzle game: taking big risks and quitting when backed into a corner. And my greed is to blame."

Don’t fear the rise of Fortnite and other video games – they bring young people together (Emily Gera / The Guardian - ARTICLE)
"Yet while fears around the rise of eSports abound, in bedrooms and internet cafes around the world games such as League of Legends, Dota 2 and Fortnite have become a cultural phenomenon, bringing young people from different regions and religions together and bridging divides."

Playing Your Song: The Evolution of Dynamic Music in Games (Jack Yarwood / EGM - ARTICLE)
"There is a moment in 1991’s Monkey Island 2: LeChuck’s Revenge that is seen as a breakthrough in video game music. Upon leaving the campfire at the beginning of the game, the mighty pirate Guybrush Threepwood enters the small town of Woodtick. As the character moves from screen to screen and interacts with certain objects in the environment, the music changes seamlessly to match the actions unfolding on screen."

Clark Tank: Steam Library changes, viability of Roguelikes & playing Noita (Brace Yourself Games / YouTube - VIDEO)
"Every third Friday at 1pm Pacific time we stay on top of the latest game industry trends by examining the Steam top 50, scrutinizing the latest Kickstarted games, and by playing the most prominent recent releases. [SIMON'S NOTE: informative as always, use the timestamps in the description to navigate the sections.]"