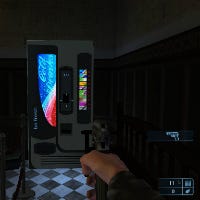 This week's highlights include devs on the effectiveness of jump scares in horror game, a unique in-game soda machine documenting project, and LOTS more.

Well, that darn Game Developers Conference show which I help organize is coming up fast - here's the video trailer for the IGF Awards and for the Game Developers Choice Awards btw. So there's not a bunch of time for metacommentary. But there's a lot of good writing/video out there for games, and really happy to highlight it - even in busy times!

Richard Garfield, Skaff Elias, And Valve On Balancing, Community, And Tournaments In Artifact (Suriel Vazquez / Game Informer - ARTICLE)
"I had the chance to sit down and chat with a few of the people behind the game, including Magic: The Gathering designers Richard Garfield and Skaff Elias, and ask [about] how the game will handle its economy, how Valve gauges success, communication, and balance, and how tournaments will be an integral part of Artifact. [SIMON'S NOTE: Valve making a game is always news, and there's a 19-minute Gabe Newell speech about 'the state of Valve' to digest too!]"

The Return Of Combat Chess (Noclip Bonus Level / YouTube - VIDEO)
"Welcome to Noclip Bonus Level - the show where we take a break from making documentaries for five minutes, to analyze the world of video games around us. In our first episode, Danny takes a look at the history of the first-person-shooter and celebrates the return of combat chess."

How an injured dev learned to make games without using his hands (Brittany Vincent / Gamasutra - ARTICLE)
"Losing the use of your hands can be a devastating blow to both your career and your lifestyle. However, there are people out there who face that very issue every day and are able to persevere and adapt. Austin-based developer Rusty Moyher is one such person."

Ubisoft is using AI to catch bugs in games before devs make them (Matt Kamen / Wired UK - ARTICLE)
"At the recent Ubisoft Developer Conference in Montreal, the French gaming company unveiled a new AI assistant for its developers. Dubbed Commit Assistant, the goal of the AI system is to catch bugs before they're ever committed into code, saving developers time and reducing the number of flaws that make it into a game before release."

How is this speedrun possible? Super Mario Bros. World Record Explained(Bismuth / YouTube - VIDEO)
"[SIMON'S NOTE: since a lot of speedrun lore/methodology is super arcane, this speedrun 'explainer' videos end up being super interesting/cool, and this one is no exception.]"

In San Francisco, Video Games Are Classical Music's New Frontier (Nastia Voynovskaya / KQED - ARTICLE)
"Clint Bajakian, whose composition and sound design credits include major game franchises like Star Wars, God of War, and Indiana Jones, has observed an explosion of audio jobs in the gaming industry over the course of his 26-year career. But he says most conservatories are still focused primarily on live performance, despite students’ growing interest in tech."

Metal Gear Survive: The Kotaku Review (Heather Alexandra / Kotaku - ARTICLE)
"Metal Gear Survive is wreckage of the long battle between the series’ lead creator, Hideo Kojima, and Konami, his long-time employer who ditched him three years ago. Kojima split with Konami after a lifetime of making Metal Gear games, going back to the first in 1987. Survive is Konami’s attempt to make a new one without him. It’s a bad game that’s more fascinating than I expected. [SIMON'S NOTE: this is a _really_ good review - keep reading.]"

Playing Video Games With My Son Isn’t What I Thought It Would Be (David Cole / The Cut - ARTICLE)
"Most of my childhood friends were also boys with single mothers, and video games played a similarly contradictory role in their lives. Yes, they were indulgences. But they were also babysitters, being one of the more reliable methods for a group of young boys to be left unattended for hours with little risk of injury or property damage."

Guardian Heroes - 1996 Developer Interview (Game Hihyou / Shmuplations - ARTICLE)
"Of particular note is HAN’s antipathy towards the adversarial nature of vs. fighting games and his drive to lead them in a more communal direction, a shift many developers continue to attempt, and struggle to achieve, to this day. [SIMON'S NOTE: so glad Shmuplations is back - some really good translations of rare Japanese dev interviews here.]"

Stealth Game Changers | The Swindle's Imperfect Burglary (Stealth Doc / YouTube - VIDEO)
"Where many Stealth Games condition players to aim for nothing less than perfection, The Swindle asks, "Can you live with your mistakes?""

Anachronox (Errant Signal / YouTube - VIDEO)
"Anachronox! You know! The last of the three big Ion Storm original properties; the one that came out just before they closed the Ion Storm Dallas offices.  The one with the comedy and the JRPG mechanics and the vaguely Ron Gilbert sense of humor.  The one made by Tom Hall!  That Anachronox.  No?  Well, listen up..."

Donald Trump Takes on the Nonexistent Link Between Violent Video Games and Mass Shootings (Simon Parkin / New Yorker - ARTICLE)
"In December 21, 2012, Wayne LaPierre, the executive vice-president of the National Rifle Association, which has lent its name to video games including N.R.A. High Power Competition... delivered a speech in which he laid the blame for school shootings in the United States at the feet of various pop-cultural transgressors. [SIMON'S NOTE: good summing up of the pre-meeting - Kotaku has a useful follow-up with video of the 'violent game!' montage played during the meeting. Bonus: Ars Technica retrospective on the Biden-era 'games & violence' meeting at the White House.]"

Into the Breach’s interface was a nightmare to make and the key to its greatness (Alex Wiltshire / RockPaperShotgun - ARTICLE)
"“I think we were resolved to having a UI nightmare from the beginning,” says Matthew Davis, co-designer and programmer of Into the Breach. “When we decided we had to show what every enemy was doing every single turn, and that every action needed to be clear, it became clear how bad that nightmare would be,” says Justin Ma, its co-designer and artist."

What horror game creators think about jump scares (Samuel Roberts / PC Gamer - ARTICLE)
"Jump scares are often considered cheap scares, and to some extent that reputation is justified. I've played games and seen films where the scares are exhausting rather than exciting, and they're not much more sophisticated than someone jumping out of a cupboard and shouting 'boo'."

Is it worth cutting out Steam to sell indie games direct? (Samuel Horti / PC Gamer - ARTICLE)
"We spoke to the creators of One Hour One Life, SpyParty, and Overland about cutting out the middle-man. [SIMON'S NOTE: Jason Rohrer's new blog postsomewhat claims victory for the off-Steam model - which I think can work if you're a 'known' dev with a unique proposition. His dev revenue curve will trend down over time - but that's an impressive start with a different curve to most Steam releases for sure!]"

Game Developers Need A Union (Dante Douglas / Paste - ARTICLE)
"The general understanding is that games are first-and-foremost a consumerist medium, not an artistic one. This viewpoint posits that videogames are a product, not a process. The creative labor of development is flattened in order to serve the narrative of games being a simple transaction—give money, get game. [SIMON'S NOTE: I did mention to Dante on Twitter that the IGDA's Jen MacLean has a roundtable at GDC on this massively complex subject.]"

This Professor Has Documented 2,000 Soda Machines in Video Games (Patrick Klepek / Waypoint - ARTICLE)
"In 2016, Marshall University professor Jason Morrissette was playing Batman: Arkham Knight. While sneaking around the shadows, Morrissette stumbled upon a soda machine. Like many games, Akrham Knight doesn’t feature any real-life soda products; that’d cost money. Instead, the developers simply made up their own: Sparkle Fizz."

Chuchel is a whimsical adventure game that’s guaranteed to make you smile(Andrew Webster / The Verge - ARTICLE)
"The first thing you do in Chuchel, a new comedic adventure game, is feed a green blob in a top hat some water. Give it enough, and it will spew out liquid like a faucet, right into the mouth of a strange fuzzy orange ball. [SIMON'S NOTE: one of my 'hey, new game!' links for the week - from the Machinarium crew!]"

The Old, Weird America of Where the Water Tastes Like Wine (Garrett Martin / Paste - ARTICLE)
"Where the Water Tastes Like Wine explores that unsteady territory between history and legend. It’s a game built on stories and how people tell them, how they can start out rooted in a body’s real experience and then grow more elaborate and fanciful over time."