[In this feature, experienced audio director Rob Bridgett (Prototype) explains how the expanded possibilities brought by modern technology have lead sound directors to have to make careful collaborative choices to support a game's vision.]

Today's audio designer, working with refined tools, is largely freed from the technical constraints imposed by prior console or development environments, and has entered a comparatively luxurious age of choice and possibility. There are freely available, high quality sound libraries and synthesis tools, as well as convincing orchestral and instrumental samples. We also have the ability to place sounds anywhere in 3D space at sample rates comparable to film sound. All these advancements give today's sound designer or composer a bewildering array of artistic choices.

It is precisely these wider artistic freedoms that are now more than ever desperately in need of having limits ascribed onto them. This feature will start to tease out some of the collaborative and creative challenges and expectations within console based video game audio, as well as starting to talk about some of the ways in which teams work together to establish direction or artistic limitations on their work.

While technical limitations have until recently provided convenient aesthetic constraints for the industry, the limitations are now being provided and even deliberately sought elsewhere: artistic, economic, artistic, and production-based limitations.

Narrowing down an audio direction, or aesthetic, can be a difficult task, and establishing limitations are absolutely key to this.

The soundscape for a video game can be imagined or interpreted in a million different ways, with the end goal of creating a sound direction which supports the artistic and technical direction and the wider product pillars and game design architecture.

During the course of a production it is also pulled in many different directions, to either fix problems, push ideas further or even as a distraction to draw attention away from certain less polished elements of the game.

Expectations of the Genre

It is important to realize that, the limits today, in the middle of a mature console cycle, rather than from the technology, are coming from the kinds of games and the kinds of music and sounds being requested (and expected) by the games themselves. The kinds of games that are going into production, and are deemed to be successful are, on the whole, becoming more narrow in their aesthetic, particularly within the so called "triple A" space of franchises.

Many games are defined now by their genre, and indeed the expected sound of these games is also driven by the expectations within those genres from the top down. The relationship a game has to its genre is a critical one; it seems that there is a choice to either play it safe, or to innovate with art direction.

Generic sounding games are nothing more than a by-product of generic games and a generic game development process in which originality is flattened into the expected sound paradigm of a given genre (call it a Hollywood focus group mentality if you will). It is, after all, the primary function of the sound design to support the game, so in many cases the desire to innovate may put the sound designer in direct conflict of interest with the product goals.

In this context, an instrumental, orchestral Hollywood film score paradigm, as well as a realistic (yet exaggerated) weapon-based sound design style, has been ascendant for at least the last ten years within many triple A titles, and while the production quality, artistry and craft involved in creating these scores and sound mixes is to be admired and applauded, and while it is not always possible, and not always a good idea to do something different, one can't help but lament the lost opportunities to have done something unique.

An area that has always fascinated me is the way that sound, music and voice work with, or against an image to create meaning. There is a magnetism that occurs when music and sounds are synced to the image, which once experienced, one cannot imagine them ever having been apart.

Perhaps the richest area for collaboration with audio is with the art direction. One could perhaps begin to argue that the more unique or interesting sounding games are often the more aesthetically "limited", or those that work within a very clearly defined and unique visual vernacular. A good rationale to begin thinking about this is that because the visuals are focused into such a narrow bandwidth, the sound design and musical choices can be relied upon more than usual in order to fill in what the other senses are lacking.

This is not to say that the soundtrack cannot influence the visual style of a game as it develops, but that more often the first steps in defining a unique game world are made within the visual realm.

"Buy-in" is more often visual than it is audible at the product greenlight process (although quality audio can often and should play a leading role in this process).

Concept art and look and feel videos are often the first exposure the sound designer or composer will have to the game's direction and tone, at least beyond conversations with the art director and game director.

Provided sound is an active participant in the early concept stages, and is a collaborator throughout production, then a creative synergy can quickly develop between the art direction and the sound direction with ideas and inspiration flowing in both directions.

The Success of the Alternate Aesthetic 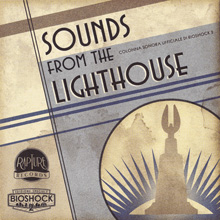 As I have already said, there have been recently a large amount of generic sounding games, mostly shooters, yet almost in rejection of this aesthetic, exceptions and examples of games with very different soundtracks have emerged.

I'd like to call out three examples of audio direction within the last few years that have been striking in their partnership with unique art direction.

All these examples have a focused and immediately clear vision; both sonic and visual that can be instantly recognized. It is interesting to note that these examples are all in firmly established and hugely popular genres, yet in each example have adopted a radical art direction.

First Person Shooter. BioShock's use of source music from the 1940s gave the game a sense of distorted realism, but this was very much a part of the vision for the entire game universe itself. This music formed a cohesive skin over the art direction which served to immerse the player in a unique historical fiction.

In addition to this, the strong use of the mid-Atlantic accent in many of the voice performances solidified a strong and clear voice direction which was extremely evocative of time and place. This title relied so heavily on the soundtrack for its effect, that it is impossible to imagine this game functioning without such a strong clear and narrow audio direction.

Rather than seamlessly flowing together, the varied pieces of music work together much like the patchwork evident in the game's visual assets, nowhere is this aesthetic more evident than in the many user created online levels. Again, a difficult game to imagine working without the many unique aspects to its audio direction.

While putting the Foley center stage for the first hour or so of the game focuses the importance and detail of movement within the game's design and game play structure. An ambient title that is in total contrast to much of the platforming genre's raucous color and sound.

With each of these titles, during the tail end of production, it would be relatively easy to discard sounds that did not belong fit their aesthetic or belong in their worlds. When an art direction, or product direction, is so clearly defined like this, and interwoven into the fabric of the audio direction, the creative opportunities for the soundtrack are satisfactorily narrowed.

In the world of film sound, the sound designer can be said to be comparatively free of technical restraints in terms of how many sounds can be played back at any one time (certainly even more so than in games), the amount of effects that a sound can be processed with, as well as rendering sounds at the highest accepted notions of full-bandwidth surround sound.

The constraints in film sound are, or at least should be now, exclusively aesthetic (similar technological and aesthetic growth rings and codependencies can be found in the history of sync film sound, from optical, to mag, to digital) and seeking out these constraints boils down to a process of experimentation, finding out what does and does not work for the soundtrack from moment to moment and throughout the many narrative arcs of the picture as a whole.

As game audio directors, sound designers and composers, our jobs absolutely require similar aesthetic limits and boundaries to be discovered and set. Much of this is achieved in a similar process to that of film, a process of trying out different sounds, iterating on content and honing into something that "works" or "feels right".

With sound, it is more a process of actually listening and trying ideas out rather than of solely relying on instinct for what might or might not work. This is also why it is easy and important to incorporate other people's ideas and suggestions into this process.

This process of starting with wide choices, trying them out in order to narrow them down to sounds that both work and support the artistic vision, is critical to the creative process of establishing a direction. This exploratory technique is often required on games where the immediate vision isn't apparent from the outset, but which needs to be worked on constantly for a long period of time before the clarity of vision emerges. It is also important that this is a collaborative effort, in whatever way works within the given team structure.

The degree to which video game sound is still determined by and reliant upon technical implementation, to some, perhaps mainly from a film sound perspective, is seen as a limitation on creativity. To others the existence of limits presents valuable creative challenges, opportunities and unique solutions. For those of us who have grown with the changes over the last ten or so years in the industry, the challenges have certainly shifted emphasis from the technical to the artistic.

In the end, it is a collaborative and iterative process that enables the work to be creative and fulfilling during production for the creators and compelling for the player, as a team works together in order to define the artistic limits of the product they are creating.

In this feature, experienced audio director Rob Bridgett (<i>Prototype</i>) explains how the expanded possibilities brought by modern technology have lead sound directors to have to make careful collaborative choices to support a game's vision.
Get daily news, dev blogs, and stories from Game Developer straight to your inbox
Subscribe