Few half-finished and broken games inspire quite as much undying adoration as Troika’s game about the undying: Vampire the Masquerade: Bloodlines. Among the many good reasons for this was the simple fact that one, nearly universally loved level, stood out from the game as a gem: the Ocean House Hotel.

Your character had to explore a haunted hotel and put an end to the poltergeist that was causing no end of trouble for a local vampire’s renovation project. But where most games would’ve had you grind through a horde of trash-mob ghosts before fighting a big boss ghost somewhere on the top floor, VtM:B approached things rather differently.

You never fought anything but your own fear. The entire level was a master class in atmospheric design, using expectation, sound effects and misdirection to scare the living daylights out of you, all without ever putting your HP at much risk; (okay, sometimes flying vases can hurt you, but looked at fairly, it’s actually really hard to die on this level).

Campo Santo’s Firewatch, which released this week, is something like Ocean House Hotel: The Game, with far more texture and depth resulting from its panoramic elaboration. The game’s environment, an isolated patch of a National Park in Wyoming, manages to present players with a diverse palette of emotion suited to every mood; when the world needs to seem vast and hopeful, it is, when it needs to be claustrophobic and foreboding, it is.

I also felt exactly the same halting in my steps as I did with my old vampiress in the Ocean House Hotel, fearful of advancing the storyline because I was afraid of what lurked around the corner, in the bushes, or in the depths of a cave. At points, the game truly dipped into horror without cheap gimmicks, simple jump scares, or an over-reliance on gore. Instead, the red thread of mundane tragedy runs through this game, tying its two primary characters together in a conversation that enfolds every single action. 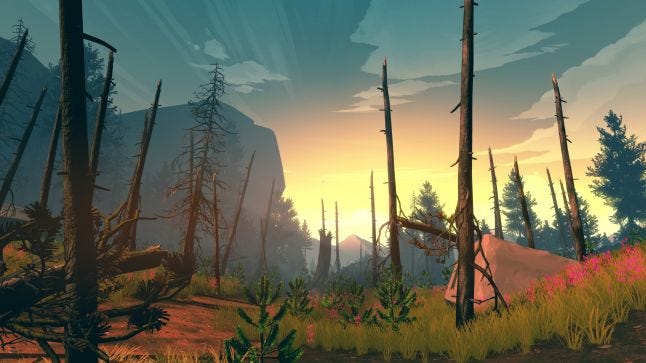 The game’s ability to use color, sound, and environment to ease you into its conceit is on full display from the very start. You play Henry, a young man who fell in love with a college professor, Julia, at the start of her career. Binary text choices allow you to shape their courtship and early relationship, serving as the prologue to the game. Interspersed between these options are brief moments where you control Henry as he makes his way deep into unknown woodlands. It seems odd at first, but as the prologue proceeds you learn that Julia has early-onset Alzheimer's; she’s only 41.

The brief wilderness scenes take on a new resonance; Henry is running, you’re running. The terror of losing a loved one to a disease she shouldn’t have closes around you like a fist and you just need to get away. The prologue, for its simple mechanics (click an option, run forward for a little bit, click a thing), interleaved them to fantastic effect that set the tone for the game.

Henry became a Fire Lookout for the National Parks Service because he needed to get away, a fact he shares in common with his boss, Delilah, and--she strongly implies--with nearly everyone else who takes this job. The isolated watchtower in the middle of the wilderness, with its spartan accommodations, takes on the hue of a refuge from life itself (and all of its responsibilities). The year is 1989 and Julia yet lives, though she now dwells in Australian nursing home and can barely remember her loved ones. The ethics of Henry’s withdrawal from his wife’s life are certainly not left unexamined, and that becomes part of the ongoing story. 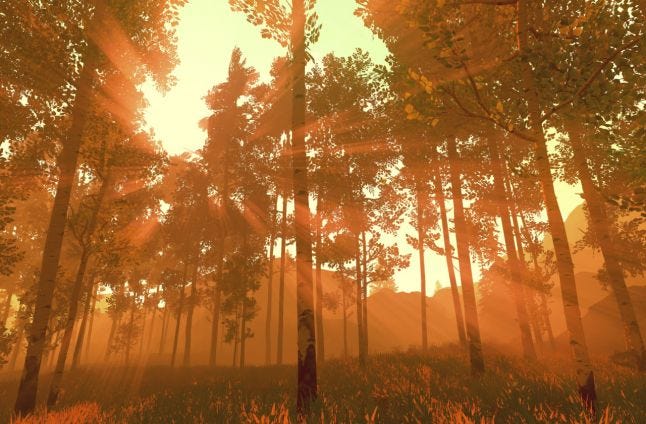 That story is told largely through a conversation. Delilah’s voice is, with only a couple of brief exceptions, the only one you hear throughout the six hours of play, and you neither see her nor so much as a picture of her. You only ever hear her through the crackle of Henry’s two-way radio. Yet through this simple medium--from giving Henry small tasks to complete, like cleaning up after obnoxious campers, to dealing with the larger and far scarier plot of the game--you get a fascinating character study; Delilah is the only other person Henry speaks to for his 79 days in the wilds of the park, and is thus a lifeline to sanity. The voice acting was superb, capturing nuance and personality with ease. But it’s the way this weaves into the game’s environment that causes it to shine ever brighter.

The plot truly kicks into high gear around two hours into the game when Henry discovers a clipboard holding a hastily written transcript of his increasingly intimate and familiar conversations with Delilah. This, combined with a mysteriously fenced off part of the park that even Delilah knew nothing about, sets tempers and paranoia aflame as the two lookouts struggle to find out who is spying on them and why.

Their conversation, more than even the game’s soundtrack, colors the lush parkland’s mood. The two lookouts’ suspicions and growing desperation strain their usual witty, pun-laden banter and the same vistas you’d become familiar with over the last couple of hours become sinister. I feel someone chasing me, even though there’s no one there. I turn on extra lights in my bedroom to feel safer.

Suddenly I realize what the game is telling me: Henry has nowhere else to run. Every direction he goes in the park may put him, and possibly Delilah, in mortal danger. To make matters worse, the game seduces you into thinking that just maybe Henry is losing his mind. The use of uncertainty and doubting one’s senses is not a new thing in fiction by any means, but Firewatch demonstrates just how well a videogame specifically can use these tricks of the literary trade to tell a story you are physically involved in. 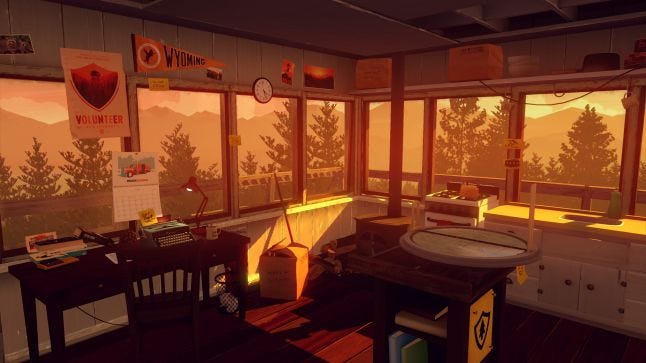 All of this emerges because of the context imbued by the game’s conversation, which is arguably its spine--and that’s also a testament to the environmental design. It bears the weight of these emotional multitudes and serves as a palimpsest for every possible mood. The same stand of trees can be sunny and inviting in one scene, and a milestone of terror in the next. When Delilah worries about Henry and urges him to “get out of there” you feel the rush of the four winds at your back, you run in fear of a man with a hatchet behind you, even if he’s never there.

This is accomplished through an almost symphonic unity between the voice acting, the visuals, the music, and the overall narrative; if any component failed, the game’s impact would be dramatically lessened. Instead, harmony prevails.

Through it all, the conversation with Delilah keeps it all tethered to some semblance of reality. The game is set in 1989 but it, mercifully, does not indulge in the period-nostalgia that’s become characteristic of so many indie games of late. Instead, it feels like the developers chose the late 1980s as a setting because it offered the most recent possible point to set Firewatch without the advent of cheap cellular communication technology eroding the pure isolation that characterizes the setting. Without that sense of solitude and threadbare connection to Delilah, the game would not have worked; you can’t have Firewatch with GPS and 4G, not in the same way, at least.

You have to be, in the cuttingly cruel words of a firework-popping camper, “some sad man out in the woods.” All but alone, crucially.

Perhaps the most magical moment of the game, oddly, was when it most lived up to its title. A forest fire begins in earnest, in clear view of Henry’s tower. I expected panic, excitement, a climax of sorts. Here, at last, was Henry and Delilah’s raison d’etre. Instead, it was an oddly tender moment, the fire becoming a strange hearthfire the two wardens shared as they calmly discussed it with both a sober sense of inevitability and good humor. All they could ever do was “call it in,” after that it was out of their hands. So they chatted, and warmed themselves up by the night-lighting glow of the flames; Delilah talked about how she came up with punny names for forest fires past. This one took on Delilah’s middle name, June, which was a mildly amusing name to give to a July fire.

In this entire game, the forest fire was not only non-threatening, but part of a grand natural cycle that offered as much comfort as the stars themselves and served as a brief, loving interlude for two characters who’d endured too much in their lives.

It was a beautiful moment to share. I almost felt as if I were intruding.

ArtConsoleDesign
Get daily news, dev blogs, and stories from Game Developer straight to your inbox
Subscribe