SEARCH
A minimum of 3 characters are required to be typed in the search bar in order to perform a search.
Audio
6 min read
Featured Blog

Fans of game music aren't a niche. They're as mainstream as it gets. And MAGFest is their mecca. Read on to hear a smidgen of what it's all about.
ALEXANDER BRANDON
Blogger
March 18, 2015

From Friday, January 23rd to Monday, January 26th, the Gaylord National Harbor Hotel, just a hop skip and a jump from Washington, D.C., is filled with 15,000 people. The hotel is enormous, boasting a huge glassed in village complete with a river and live foliage. But during these three days the open space is not filled with the hum of everyday conversation, but with the thump of game music and the yell of Colossus doing his special move from the 1992 arcade game. It is the battle cry of MAGFest. Launched thirteen years ago in 2002, MAGFest, or Music and Gaming Festival, is the largest game music convention in the world, and features not only a deluge of ravenous and passionate cosplayers, players and of course music enthusiasts, but celebrity guests. There is no doubt that conventions reveal us drawing from our fantasy nature. We dress up as our heroes or villains. We bask in the joy of other worlds, bizarre and grotesque. We pretend. And it's fun. It's fun not to be ourselves for a few days. But MAGFest is not the same as comics, film or television. MAGFest is a kind of ultimate expression of something I never imagined. 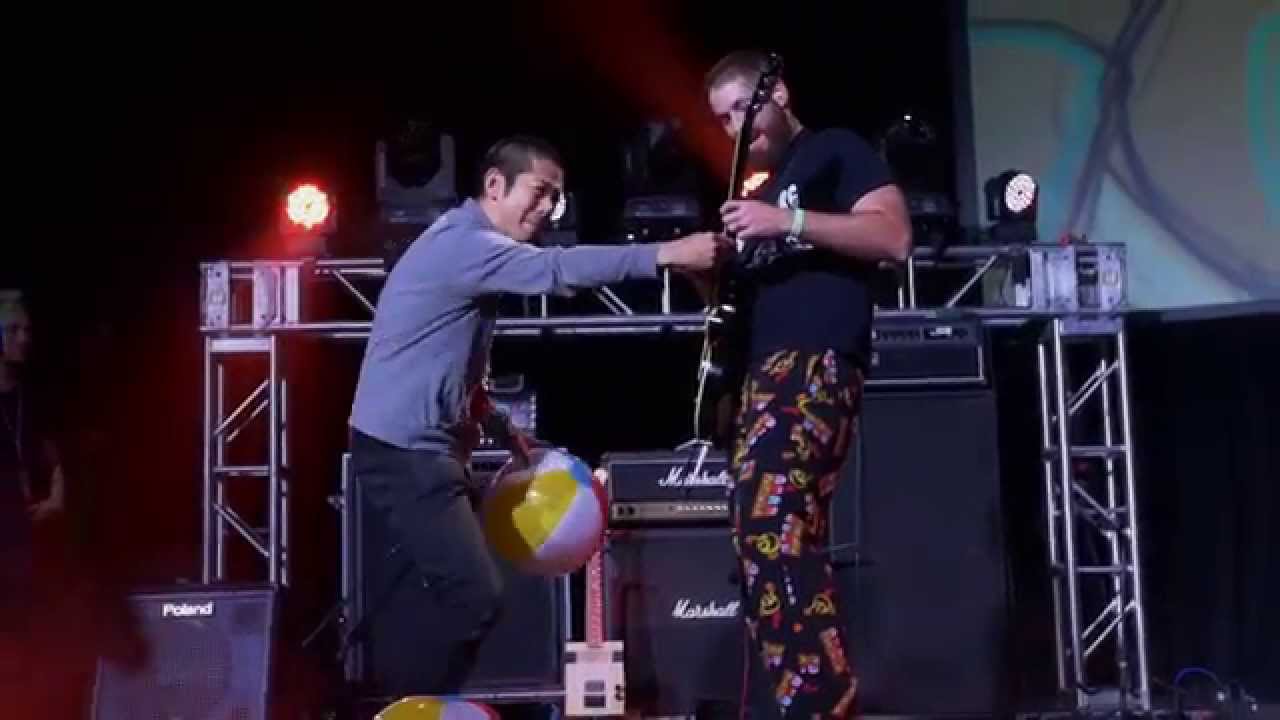 The Lonely Rolling Stars playing along with composer of Katamari Damacy: Yoshihito Yano.

Around 1985 I held handheld cassette tape recorders up to the speakers of arcade cabinets to record their music. This was considered the nerdiest thing my friends and acquaintances had ever seen. There were snickers and jeers, but I didn't care. I loved the sounds coming from these things, and I listened to them at home. My friend Jason used a microcassette recorder to tape Metroid and Zelda. These were the soundtracks of our lives.

Now the soundtracks are played live, on a stage, with scorching electric guitars, blistering drums, stomach vibrating bass, lavish lights and projection screens, and hundreds of screaming fans. In another room a group quietly ponders their next moves in tabletop gaming. Yet another room, the size of a large aircraft hangar, boasts a massive collection of free to play arcade games. In all these rooms and even the hallways, nooks and crannies of the convention groups of people across the country as well as the world embrace each other as friends who have only spoken on Facebook for the last year. These aren't just the soundtracks to our lives, these soundtracks are our lives for these four days. These 8 and 16 bit synthesized melodies weave our destinies together.

We are all equals here, and it isn't realized this way anywhere else. The composers Yuu Miyake and Yoshihito Yano were flown in to participate in the concert held by "The Lonely Rolling Stars", one of many talented and incredibly passionate video game music (VGM) cover bands that performed at MAGFest. The band performed while the composers threw beach balls into the audience, and the audience itself formed a spinning ball, the outermost layer of which would grab people close enough who weren't already spinning. The music fans reflected the game back to the band and composers who radiated it onstage. Yes, it's a pretty impressive experience. The next day the band took it easy, and early on chilled out in their suite. Not watching the local news or moaning about the latest vitriol filled argument on Facebook. They were casually playing "Castlevania: Symphony of the Night".

For a composer like myself, I'm lucky enough to have admirers at such a get together, but here I'm like everyone else: a fan. And I'm not only accepted, I'm invited with open arms. In fact I need guidance in this vast temporary world. Good friend Chris Serani (aka "Flik"), a tech wizard, talented voice artist and brilliant photographer, helped guide me through a Dwelling of Duels Listening Party where I not only heard amazing songs played for the first time but listened alongside former LucasArts composer Will Roget; another colleague but also avid fan of game soundtracks. Four years ago at my first visit I was part of a panel with Hiroki Kikuta (Secret of Mana composer) on one side and Jon St John (voice of Duke Nukem) on the other. I had to check my pulse sitting next to one of my most revered composers and one of the most iconic voices in our business. I've met fellow cast members from "Skyrim" for the first time. I've met the great Danny Baranowsky (composer for Super Meat Boy and Binding of Isaac). And I've been able to shake the hand of the great Smooth McGroove, who has rendered numerous game tunes in a capella glory. Evenings of great fun were had with fellow composers Chris Geehan and Dan Byrne-McCollough of Hyperduck, comrade in arms Jameson Sutton, Flik, and the great team at Loudr: Josh Whelchel, Chloe Carpenter, Sebastian Wolff and Amanda Apparius.

The hardworking staff and volunteers of MAGFest are just as passionate as the attendees. They kill themselves for this conference and it clearly shows, having grown from a few dozen to over 15,000 in 13 years, with no signs of slowing down. And it's young enough that one is lucky enough not to have to fill out endless forms to be a part of it. People like Steph Prader who coordinate the guests and tackle the lion's share of administrative work are mountains of energy and selfless devotion to those who want their own special experience, and folks like Nick Marinelli ensure that signage is appropriately placed so you don't get lost in this Star Destroyer of a hotel. The kind and patient volunteers assist anyone who looks confused, and there are folks serving guests food during mealtimes to make sure they don't "death"; the number one rule at MAGFest. Standard convention wisdom of course applies of thorough and frequent hand washing, keeping one's voice from yelling for too long, and proper hydration.

GDC has come and gone this year, and another version of insane administration wrangling well over 24,000 industry has taken place helmed by the incomparable Meggan Scavio and her conference warriors. To those of us in the industry who have desired to step back from their professional chairs and dive into what made them want to sit there in the first place, MAGFest is the place to be.

Check it out at http://magfest.org/!