SEARCH
A minimum of 3 characters are required to be typed in the search bar in order to perform a search.
Art
5 min read
article

Live cutscenes might be the future of cinematics. Why not focusing then on directing rather than staging?
Game Developer
Staff
July 09, 2012

For the last years -and I think that feeling would stay at least until next generation- I have found myself more and more surprised by the growing parallel drown between video games and cinema, while at the same time so few people seem interested in analysing cutscenes the same way one analyse movie scenes. And in that perspective, video games cinematics are still far behind cinema.

While making a movie, the main question, the one that will permit to distinguish style, sometimes to recognize instantaneously a director, is the one of the movie camera. "Where is it set?", "How does it move?", "What is it looking at? Why?". Where it is set is the most important among thoses.

Yet in video games the main preoccupation is more likely the "mise en scene" (staging): movements of people, objets... The camera is simply set in order to show the action, without real concern of position. And as fashion seems to be (for action/adventure games, which are majority) what we French would call "mise en scene Hollywoodienne", that is to say cutscenes with explosions everywhere, building collapsing, etc... the camera is always set at the same place. Other scenes, more calm, such as a simple dialog become terribly flavourless, in a directing point of view. All those cutscenes look exactly the same: shot-reverse shot in a very school way, sometimes cut by a large shot showing the two characters walking, cut below their chest. Every cutscene is similar to another from a different game, not matter what it shows.

I no longer count times where I've been sad not finding a nice travalling a la Shining (Kubrick's movie), or a beautiful hand-held camera effect. I'm not asking for filming a cutscene like Lars Von Trier would (He is a Danish director who films almost every shot with hand-held camera), but for something more sofisticated that moving the camera 3 centimeters up, then down, then putting it back in a still position. It is not that hard to program a realistic hand-held camera effect.

Have you ever seen such a travelling in a video game? Long, beautiful, oppressive shot.

Lately, only one game has caught my attention in a directing point of view: Rockstar's Red Dead Redemption. Rockstar perfectly understood how to put real cinema in a cutscene. It's one of the (too) rare games where the camera moves and is set with reflexion. The style is unique and recognizable. The camera has a slighty hand-held effect, and often offers a large shot to show discretly an element that will be used later in the cutscene. Like when John Marston, the main character, arrives in the town of Chuparosa, an important character named Landon Ricketts is slightly visible in the first shot, and will interced with the main character later in the cutscene. 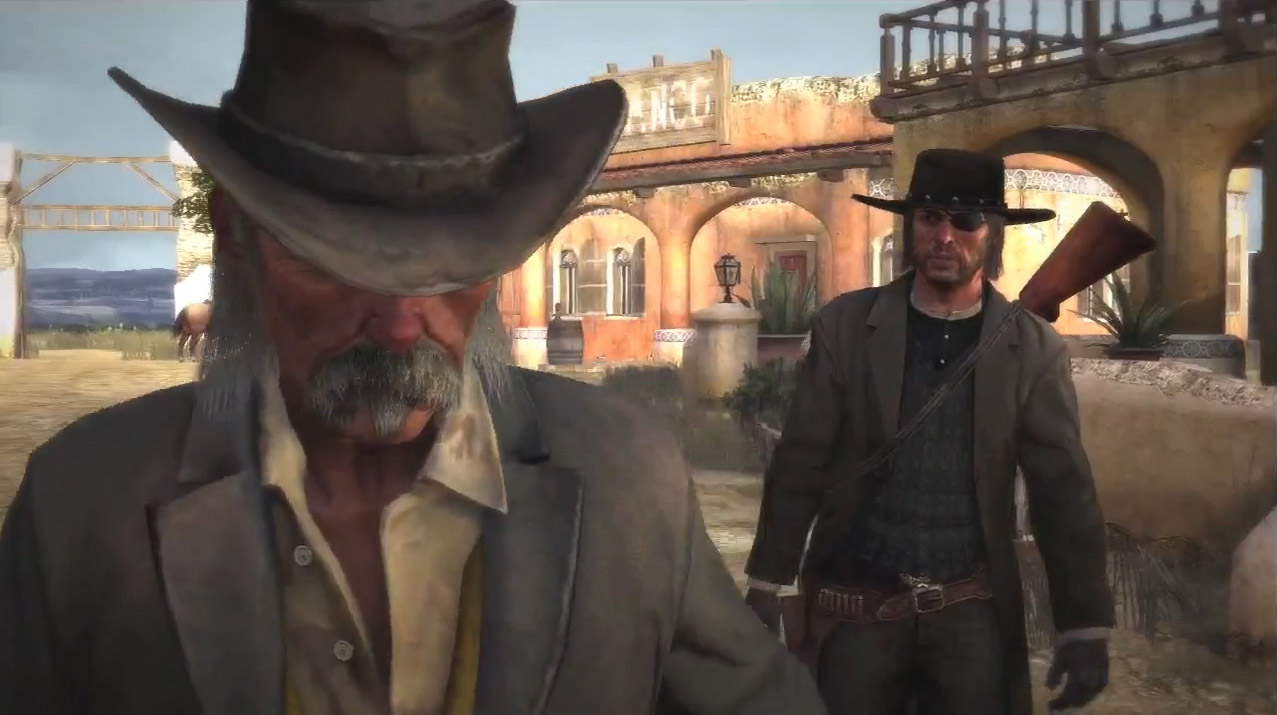 There is in this game a real concern about directing, as well with staging as with camera. Besides, which games are more compared to cinema than Rockstar's. I haven't played Max Payne 3 yet. But I bet the statement would be the same.

This year, a ray of hope has appeared in the horizon. Since Skyrim (I think), live trailes have exploded. Skyrim, Prototype 2, Mass Effect 3, lately Assassin's Creed 3 and Darksiders 2... Video games commercials are made with live action, without showing actual gameplay or graphics. Funny how people are not shocked with that, because they know that now with budget for AAA games and the power of computers, you can find almost the same thing in the game that what is showed in the live trailer. Do you remember the time where there were live opening sequences? Like the first Resident Evil? I personnaly remember the opening sequence of a SEGA SATURN game called Shinobi X. So kitsch. We used to laugh back then because of the differences between live actors and digital graphics. Not anymore.

Today already in cinema, the differences between a real scene and a CGI sequence is a question of small details for the trained eye. In a few years (maybe two or three consols generations), we would have the same level of graphics in-game. So I dare a prediction:

Ten years from now, live cutscenes well be back.

With live actors and live decors. Not for every games, especially blockbuster that have explosions everywhere near the camera (who said Call of Duty?), but more for "calm games", possibly RPGs. Lately Ubisoft has build its own cinema studio, for now to direct its own adaptations of games. So they might be among the firsts to try the experience. Famous actors are already asked to feature in video games (Ellen Page plays the main character of David Cage's next game: Beyond two souls), so I think we are not that far from putting live cutscenes back in games.

If that change will occurs, there will be place for directors, famous or young directors to be. If not, the evolution will take more time. In any case, video games need real directors to express their art in video games. Cutscenes need authors to direct them, the same way indie games need authors to design them. In a few years, I hope players would wander "who directed cutscenes?" the same way they can now wander "Who game designed that?". Perhaps we would even have awards borrowed from cinema for cutscenes and actors in a game...