Designing a 'demake' in 2018: The making of PS1 love letter OK/NORMAL

The nightmares of the '90s are alive in the work of devs like Toni Kortelahti (aka 98DEMAKE), who chats with Gamasutra about using historical techniques to make his PS1 demake game OK/NORMAL.
Phill Cameron
Blogger
July 11, 2018

“The PS1, due to its severe technical limitations, had a really distinctive look in its graphics," says Toni Kortelahti, otherwise known as 98demake.

"The polygons were all wobbly and jittery, and the textures were warped and weird. The ridiculously low resolution, on the other hand, often made it so that you weren't always sure what you're looking at — turning even innocent games into scary ones."

Kortelahti, developer of OK/NORMAL, has been creating "demake" videos of what games like Dark Souls, GTA V, and Uncharted might have looked like had they come out on the PS1.

Capturing the specific look of the characters and locales while also sticking close to PS1 development methods, these videos recreate a specific mood and style that came with the system and its games. It can inspire a sense of discomfort, of not entirely knowing what you’re looking at; it serves games like Silent Hill well, creating dread purely through the visual style inspired by the system’s limitations.

In working with this "demake" style, Kortelahti has noticed the feelings (Nostalgia? Horror?) it can evoke in people. and he feels driven to continue experimenting with it. Both to let his own interest in the style flourish, and to continue to explore what it can do for game design.

Kortelahti’s work demaking games wasn't born from a deep interest in exploring the subject matter. His work in low-poly modeling just happened to get a bolt of inspiration from a contest that was going on, resulting in a passion that would lead him into working with this visual style.

"The PS1, due to its severe technical limitations, had a really distinctive look in its graphics...you weren't always sure what you're looking at — turning even innocent games into scary ones."

“I saw an article somewhere, one where readers of said site had submitted some demakes. Not full videos or anything, nor PS1 specific demakes, but still — these pictures of how a game might've looked back in the day," says Kortelahti. "Having an expansive background of 3D animation and a history of low-poly modeling, I thought the idea was fun, and wanted to give it a go myself. That's when I created my first demake of The Last of Us. Shocked by the immediate popularity of it, I figured I'd keep making more — and here we are."

Still, it was more than just making new games look like old ones. Kortelahti saw something in this visual style that gave it a unique power and appeal. While the low-poly style may have been a necessity based on the hardware of the time, it still had a unique power to it. It still could do some things in ways that more photorealistic styles could not match.

“I think all those things make the PS1's graphics really unique and interesting. Every other 3D console after it handled 3D a lot better, and I think some charm was lost. You weren't always sure what you were looking at, and the games had your imagination going wild in ways that modern graphics really can't. I feel that can be a really powerful tool — especially in genres like horror,” says Kortelahti. 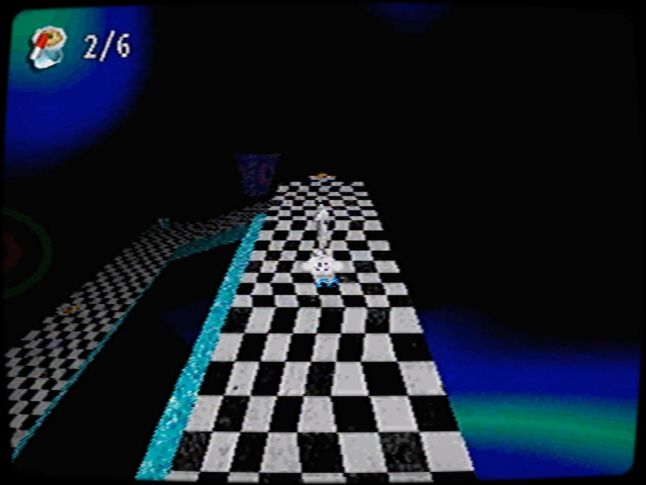 The lack of clarity in certain aspects forces the player to do some of the legwork with their imagination, giving them a framework to work off of, but little else. There was also something surreal and dream-like that came from this low-poly style, creating places open to interpretation rather than the crystal clarity of images in modern titles. Through his work creating these videos, Kortelahti’s feelings about the low-poly style were strengthened, creating an interest in what this style could do for games.

After a time doing videos on Red Dead Redemption, Fallout 4, and many more famous titles as if they were PS1 games, the developer began to consider doing work on their own title, creating their own experience using the low-poly style they’d become so skilled with.

“A lot of people had been asking for me to create an actual game with these graphics, and I felt the time was right," says Kortelahti. "Doing something like these videos, while creative and fun, can still get pretty stale after a while. So, jumping in to game development was a pretty natural next step. Not saying I'll never do the videos again, but game development certainly has taken priority."

OK/NORMAL, an exploration of a world made uncertain through its low-poly visuals, was what came of Kortelahti’s work in demaking games. Drumming up feelings of fear and discomfort in players seeking meaning within its colorful, but surreal, landscapes, it was a powerful culmination of the developer’s work in seeing what the PS1 style was capable of conveying, emotionally, through its visuals.

To do this, it was important for Kortelahti to make the game as exactly as possible, sticking to the limitations of the PS1 console. Not only this, but he would draw from the visual style to create an experience that felt suited to the console and its visual limitations, capturing the spirit of the era while harnessing that unique imaginative power its visuals brought out of its players. 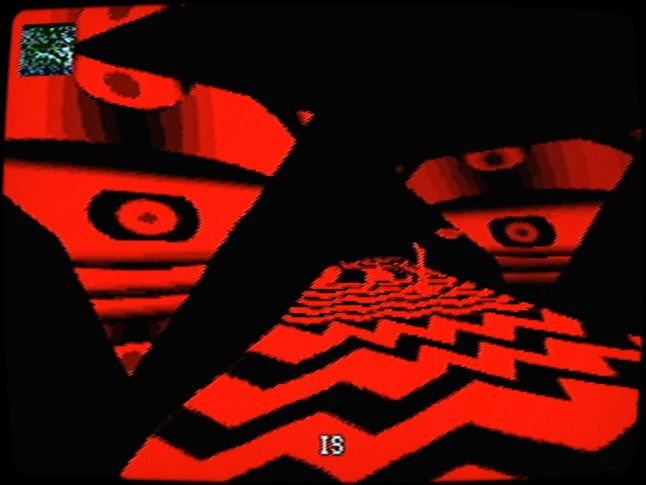 “Not only did I want the game to accurately follow the visual style of PlayStation games, I wanted to create the kind of game that actually might've been released for the system. While there were a lot of impressive gameplay mechanics back them, a lot of games, especially low- to mid-budget ones, were often fairly clunky and simplified,” says Kortelahti.

This led to the short, surreal look of the game and the experimental nature of its play. Players can work their way through the unsettling world of OK/NORMAL in under an hour, bearing witness to frightening events and exploring discomforting landscapes through a mechanically-simple experience, but one rich with imaginative opportunities.

This didn’t come from a vacuum, though, as the developer researched and drew upon more experiences from the PS1. “My past work drove me down to really study what was happening under the hood back then, and at the same time, I've discovered a lot of great obscure games that helped shape OK/NORMAL in to what it is,” says Kortelahti.

“For OK/NORMAL, the largest influence was LSD: Dream Emulator. It's the kind of thing I want to do — games that don't really even fit in to the traditional confines of what people consider ‘games’. LSD: DE didn't really tell you a story, but rather had you as the player figure it out. The gameplay was hardly very exciting, but the experience, as a whole, is a very memorable one. The mechanics were bare bones, but that wasn't the point." 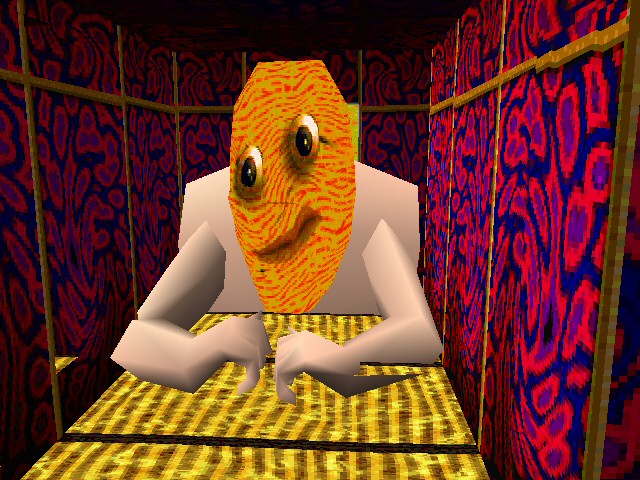 This led to the game’s surreal, dream-like style, but was also a tie-in to the visual style as well. The visuals create this sense of uncertainty, and the play focused on exploring this place and collecting things within it, giving players a reason to focus on something they aren’t entirely sure of. It creates a laser focus on the visuals and what they mean to the player, pushing that sense of the unknown and contemplating it, often finding something discomforting within that lack of certainty.

More games Kortelahti looked at would continue to strengthen the visual style’s powerful lack of clarity. “Other games I looked at were games such as Kula World and Kurushi, with both rocking that bizarre dream-like element that a lot of PlayStation games had. Even a lot of demo discs on the PlayStation had that weird, inexplicable feel to them,” says Kortelahti.

This sort of study guided him in recreating the visual style properly, sticking to a style of development as close to that of PS1 game creation as possible to convey that unease it created. “All the models are pretty much era accurate, as far as the number of polygons goes," says Kortelahti. "The textures are tiny in both size and number of colours, eg 128x128 with a dozen or so colors. Everything is built with the limitations in mind, since it still has to look good, even if it is very low res."

"I like the self-imposed challenge of following these rules as much as possible, to create something that looks accurate to the era, and unique."

Using a development style from twenty years ago does come with certain challenges. “It's kind of a backwards way of developing, and requires a different kind of workflow," he adds. "For instance — where in a modern game a 3D plane is just that, a single plane, here you need to subdivide it into a bunch of smaller quads to counter excessive texture warping, resulting from affine texture mapping. I like the self-imposed challenge of following these rules as much as possible, to create something that looks accurate to the era, and unique."

“I learned a lot about the limitations, and techniques to get around them. I spent a lot of time looking at wireframes from old games, to nail the amount of polygons both in characters and environments," Kortelahti continues. "I learned how to get around the texture warping, and how to structure 3D models to look good while taking that in to account. I am by no means a professional programmer, so creating this game certainly was a learning experience in development all around." 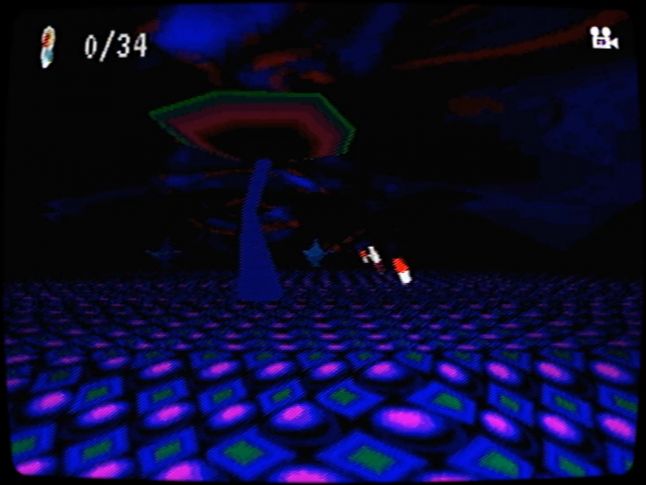 It’s something that Kortelahti did intense research on, finding ways to tweak modern tools so that they closely stuck with that visual style he wanted to utilize. “I've read a lot about what was happening under the hood of a PlayStation, read as many developer interviews as I've been able to find, watched tech demos, looked at wireframes from that era, and so on.  I obviously work with modern tools — Unity, Blender, Photoshop — but you can very accurately replicate the aesthetic of PS1 games with shaders, lighting and textures, while of course the game wouldn't actually run on a PlayStation,” says Kortelahti.

It would be a challenge to create this look with modern tools, but the visual style was a part of the lifeblood of OK/NORMAL, and possessed important elements Kortelahti wished to capture with his modern work. Like the eerie PS1 games that inspired it, the game would convey a fear within the unknown, all from that uncertainty the visuals created. For Kortelahti to capture that feeling from wandering his world, it would be worth the hard work.

“I think, if you're going to create a game you advertise as a PS1, Game Boy, SNES or whatever inspired — you should strive to do it as accurately as possible. Modern low-poly games are just fine and dandy, but if you're going to have ambient occlusion and anti aliasing slapped in there — it's hardly ‘PS1 inspired’ at that point. That's just me though. Obviously, everyone is free to do whatever they want, but personally, I want to keep that authenticity, even if it means more work and not having modern techniques to help,” says Kortelahti.

This authenticity was important to Kortelahti’s work, and to capturing the power of a visual style that isn’t seen that often any more. It’s special power to coax out the imagination through its uncertainty was one the developer felt was worth recreating and using, helping others to see the dread that creeps within a style that, once born of limitation, now offers developers yet another visual tool to create emotion within the player.